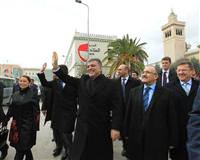 President Abdullah Gül states, “During this critical period, Turkey is determined to continue to stand by Tunisia and to contribute to every aspect of their success.”

Speaking to journalists at the Atatürk Airport, upon his return from Tunisia, President Gül reminded that by accepting Munsif Merzuki's invitation, he recently became the first president to visit Tunisia since the revolution which began on January 14th. Gül explained that he was greeted with great enthusiasm by the Tunisian public during his trip. During his visit to Tunisia, Gül met with Tunisian President Merzuki who greeted him upon his arrival, Prime Minister Hamadi Jebali and President of the Constituent Assembly of Tunisia Mustapha Ben Jafar.
"This trip was a very important, successful and productive trip from all aspects," Gül stated. "During the meetings held we first and foremost decided to develop relations in every area between the two nations. Later, I was relayed information on developments in Tunisia. To be honest, what we are so extremely pleased with is the fact that Tunisia has truly seen great success. As you know, this wave of democracy was ignited by Tunisia from the start. In a short period of time, Tunisia has realized a revolutionary transition to democracy. While doing so, they have also managed to protect their nation's unity and integrity. At the same time, they did not allow for a division in the country to arise. Through holding elections, they have elected a president and established a coalition government, which has received a vote of confidence. Tunisia is currently working on drafting a constitution."
President Gül expressed that there are very special ties between Turkey and Tunisia, nations which have shared a joint history spanning back 400 years. President Gül stated that traces of this joint history are quite evident in Tunisia, a fact all of the Tunisian public takes pride in.
Speaking to the press, Gül delivered a message to Tunisia; "During this critical period, Turkey is determined to continue to stand by Tunisia and to contribute to every aspect of their success."