A Konya breeze at the U.N. 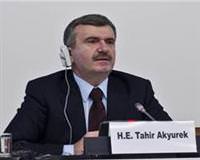 Konya was brought up as a model city during a conference on sustainable urbanization held by the United Nation’s Habitat Unit.

The High-Level Meeting on Sustainable Urbanization of the UN', held at the United Nations and attended by a number of American academics and urbanization specialists, focused on Konya's multifaceted interests and praised the city's urbanization. Qualifying Konya as a city that not only embraces its historical significance but also fulfills the demands of modern urbanization, the specialists present also touched upon the successes of Konya's social projects. Speakers at the meeting drew attention to Konya's tourism and cultural potential and emphasized that Konya is a city that should be known by the entire world.

During an address for UN Habitat administrators and urbanization specialists, Konya Municipal Mayor Tahir Akyürek emphasized that with its 9,000 year history, Konya offers a unique example of the coexistence of modernism and tradition. Akyürek explained that in addition to Konya's extensive history and culture, it is fast becoming an exemplary city in terms of sustainable urbanization with the development of a series of projects in industry, education, tourism and health. Stating that as the Konya Metropolitan Municipality they place high importance on sustainable urbanization, Akyürek added how pleased he was to be presenting these ongoing projects at the UN.

Noting that they are not solely focused on developing the city of Konya, Mayor Akyürek states, "The main focus of the Konya Municipality's urbanization concept is ensuring the peace and happiness of the city's residents. You will see happy people that smile at one another in Konya. Our golden rule for running our municipality is our notion of being people-centered," states Akyürek.

While a number of foreign urbanization specialists that were present at the conference emphasized the need for Konya's cultural and historical legacies to not only be protected but also to be promoted throughout the world, they also drew attention to the significance of Konya, which boasts treasures of global interest such as Mevlana and Çatalhöyük, becoming a more well-known and easily accessible city.

During the conference, specialists expressed the need for increased international flights and noted that with proper promotion in Europe and the United States, Konya could draw in a significant number of tourists.

THE MAYOR OF KONYA SPEAKS WITH SABAH

Speaking to SABAH following the conference, Mayor Tahir Akyürek expressed that during the meeting at the UN; they explained Konya's position and shared with urbanization specialists the ongoing projects by the Konya Municipality, which could be examples for other international cities. Akyürek also noted that efforts are ongoing to ensure the 2016 HABITAT meeting is held in Turkey and also explained that he spoke with UN officials to discuss having Konya serve as a location for one section of the meeting, should it be held in Istanbul.

Anatolian cities are not extremely well-known..

"Anatolian cities are not very well-known throughout the world, however Konya is lucky. When we called it 'Rumi's city' a lot of interest was shown in Konya. Therefore, we have confirmed once again that in the international platform Konya needs to increase its Mevlana-based cultural activity programs."

Akyürek explains, "This meeting in New York was extremely beneficial in regards to what needs to be done to enter the category of becoming a city of global interest that hosts over 20 million visitors a year," and states, "our efforts will gain momentum as a result of this meeting, we are raising our objectives for Konya."