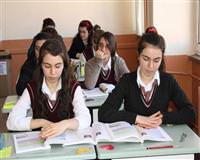 Despite harsh criticism from CHP deputies, Turkey will be increasing the compulsory education level to 12 years. CHP meanwhile is objecting to the series of amendments intending to add flexibility and liberties to the national education system.

The main opposition, the Republican People's Party, or CHP, is concerned that the inflexible education model established during the Kemalist era may soon be altered. Although CHP is most vehemently against the İmam Hatip religious school system, they are also defending the notion that compulsory education needs to remain at a continuous eight years. The new compulsory education bill amendment increases the compulsory education requirement to 12 years, which are divided into three terms, namely elementary school, middle school and high school.

The public supports the AK Party's efforts to establish a more liberal national education system which will require 12 years of study. The AK Party's intentions are to establish an educational system which will allow for students to be able to select the career path of their choice. CHP deputies on the other hand believe that religious school students should only select careers that are related in some way to religious affairs.

What are some of the changes being made in Turkey's educational system?

The eight-year continuous education requirement established during the February 28th postmodern coup has been brought to an end. Students will now study for a total of 12 years, which are divided into four years of elementary school, four years of middle school and four years of high school.

Transferring to correspondence education will only be done following the completion of middle school.

Preschool education is not mandatory.

The age for starting elementary school has been brought from seven down to six.

The differentiating coefficient system for university placement has been lifted.

Students' personal achievements will be recognized and now brought to the forefront in university applications.

High schools and middle schools may be opened in the same building, in accordance to the 'facilities and conditions'. In the same manner, newly opening vocational schools will also be able to simultaneously host middle school and high school students. Middle schools may also be opened that will include the option of receiving religious education such as in İmam Hatip vocational religious schools. Middle schools will offer their students elective class packages in which a student will be able to select what their subject focus will be. Students that want to be religious school graduates will be able to select addition religion, culture and Koran lessons in their class schedule. The same applies to students who want to receive a technical education; they will be able to take certain additional basic vocational classes in their class program.

With the new regulations to be put into effect by Turkey's Ministry of National Education, the significance of the Level Determination Exam (SBS) taken by students prior to beginning high school will slowly taper off and in a few years time the placement exam system will be lifted entirely.