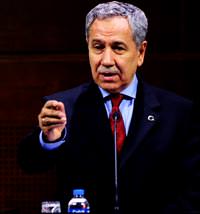 Deputy Prime Minister Bulent Arınç responded to the release of Nedim Şener and Ahmet Şık by stating, “It is saddening that they spent 375 days inside.”

Deputy Prime Minister Bülent Arınç welcomed the court decision to release certain suspects in the Odatv case, including journalists Nedim Şener and Ahmet Şık. "One can only be glad at their release," state Arinc. "It is saddening that these friends, who happen to be journalists, spent 375 days, in other words more than a year, inside." Bülent Arınç was speaking a news conference following a cabinet meeting in Ankara.

The court based its decision yesterday on the length of time the defendants had already spent in prison and the low risk of them being able to tamper with evidence in the case. "The reasoning behind this ruling is of remarkable significance. This is what is right. We should in fact question why it is that the court didn't deliver this decision earlier." Mentioning that the same conditions need to be applied to all other suspects, Arinc stated, "A lengthy detainment should not be transformed into punishment itself. Once all evidence has been collected and there is no longer any chance of a suspect running, then the decision needs to be made as soon as possible for their release. I hope that based on these reasons, courts will now be able to make different decisions when it comes to their cases and connected suspects."