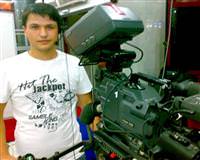 No news has been received from two Turkish journalists who entered Idlib last week to cover developments in Syria and shoot a documentary.

Approximately one week ago, Adem Özköse the Middle East correspondent for Gerçek Hayat magazine and cameraman Hamit Coşkun arrived to Idlib by crossing through the border at Hatay. They were in Syria to cover the developments as well as to film a documentary. They initially made contact to inform that they had arrived to Idlib safely; however no news has been received from the journalists in the past four days since.
Friends and family members of the journalists gathered in front of the Turkish Foreign Affairs Ministry demanding information of their safety.
Friends and family members of Adem Özköse, a writer for Gerçek Hayat magazine and Milat newspaper as well as cameraman Hamit Coşkun gathered in front of the Foreign Affairs Ministry in Ankara and requested to speak with ministry officials in order to acquire information of the journalists' whereabouts. Muhammet Halil Kaya spoke to the press on behalf of the group and explained that it has been four days since they have heard from the two journalists who entered Idlib a week ago in order to portray the savagery transpiring in Syria to the public. Kaya expressed their concern for the safety of the two journalists' lives and requested the Foreign Affairs Ministry officials act urgently on the matter.
Meanwhile, Milat newspaper's Ankara representative Aslan Değirmenci spoke with an official from the Ministry of Foreign Affairs over the phone. After the conversation, Değirmenci announced to the press that ministry officials stated that they were looking into the issue and would be making an announcement on the matter soon.
The group that gathered in front of the Ministry of Foreign Affairs later went on to Syria's Ankara Embassy. There, Eyüp Gökhan made an announcement stating, "Journalists, aid workers and civilians cannot be harmed anywhere in the world. We are concerned for our friends' lives. We are waiting to receive an explanation from Syrian officials."
Özekin went on to state that they would continue to wait in front of the Syrian Embassy until they heard news on the two journalists' condition.