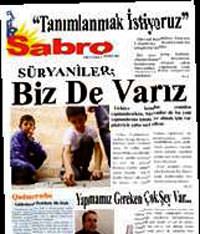 Turkey’s Assyrians have rejoined the press world with the March 12th release of ‘Sabro-Umut’, the first newspaper released by the community since 1918.

Returning to Turkey last year after leaving 25 years ago for Switzerland, Tuma Çelik described the reason behind publishing the Assyrian newspaper. "My family's roots stem back 600 years to Midyat. Our intentions are to ensure Assyrian issues reach all segments of society and to facilitate people getting to know one another better."


Çelik, who released the paper with four friends, explains that Sabro-Umut consists of nine pages printed in Turkish and three pages in Assyrian. "We want this paper to be read throughout Turkey. We have sent them out to subscribers and have been receiving applications. There are a few locations where people will be able to find the paper, such as Antakya, İzmir, Mardin and Diyarbakır. We tried to reach these areas. Those who do not want to lose the Assyrians, which have been living on this land for 6,000 years, should support us."

There are still approximately 25,000 Assyrians in Turkey and 300,000 in Europe. The last Assyrian newspaper to be released in this land was in Diyarbakır in 1918, explains Çelik: "The paper was named Bethnarin, which in Assyrian means Mesopotamia. There were other magazines that came out during the Ottoman era in Elazığ and Diyarbakır. However, coinciding with the end of the Ottoman Empire, we resigned from the press world."