Journalists missing in Syria have been located 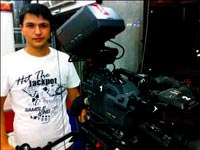 Foreign Affairs Minister Ahmet Davutoğlu has announced that they have exerted intensive efforts to locate the two Turkish journalists that went missing following their arrival to Idlib in order to ensure their safe return home.

Gerçek Hayat Magazine Representative and Milat Newspaper writer Adem Özköse and cameraman Hamit Coşkun arrived to Syria a week ago in order to cover the developments unfolding and to film a documentary. After calling to announce they had arrived to Idlib where, activists said, dozens of people have been killed in a Syrian army bombardment and house-to-house searches, no news has been heard from the two Turkish journalists since. Responding to questions regarding the two journalist's whereabouts, Foreign Minister Davutoğlu explained that ever since they heard the news of the two Turks having gone missing, they have been exerting intensive measures to try to locate them.


Davutoğlu expressed that they have taken initiatives with the Syrian administration and related parties in order to locate the journalists and will continue to do so, and stated, "Members of the press working under extraordinary conditions may face certain risks, however while they perform these duties their safety must be secured."

Meanwhile, according to information obtained from local sources by the Anadolu Agency, the journalists' health is stated to be in good condition. According to the source, the journalists were detained in the al-Fua village located nearby the town of Binnish in Idlib and were later handed over to Syrian security forces.