PM Erdoğan: I pay no heed to Stratfor’s hearsay 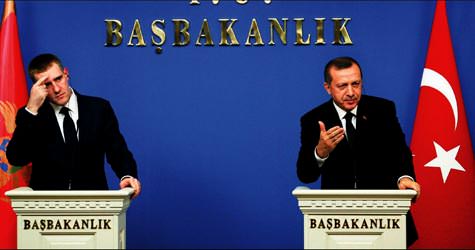 Erdoğan didn’t even feel the need to bring up the Stratfor issue during CIA Director David Petraeus’ trip to Turkey.

Prime Minister Tayyip Erdoğan met with one of the youngest state leaders in the world yesterday, the 1976-born Prime Minister of Montenegro Igor Lukšić. After attending both one on one and committee meetings, Erdoğan and Lukšić held a joint press conference during which the prime minister also responded to a series of questions regarding the recent unannounced two-day visit by CIA Director Petraeus at the start of the week.

When asked about the meeting with Petraeus, Erdoğan simply stated, "A request was made to meet, so we did." Responding to a question on allegations made by Stratfor regarding Erdoğan's heath which have surfaced in the press, Prime Minister Tayyip Erdoğan responded by stating, "Because I don't pay much heed to hearsay that surfaces in newspapers, I didn't even feel the need to bring it up."

In reference to Lukšić's visit, Erdoğan stated, "Whether it was with the Euro-Atlantic or EU process, we have always stood by Montenegro's side and we will continue to do so. We aim to bring our 42 billion dollar trade volume up to 100 billion dollars."

During the joint press conference, Erdoğan went on to deliver the following messages:

HE WAS A GUEST OF THE MİT: (In regards to a question on the CIA Director's recent visit.) The CIA Director was here as a guest of the MİT (Turkey's National Intelligence Organization). I responded affirmatively to the request to meet. We held a meeting attended by myself, the undersecretary of the National Intelligence organization and CIA Director Petraeus. We had the opportunity to discuss the developments in the region. As you know we discussed Iraq and Syria and because he knows the area well, we had the opportunity to evaluate the situation.

THEY HAVE NO OTHER CAPITAL: (Regarding a question on the Stratfor news.) I don't pay much heed to hearsay that surfaces in the press and therefore I didn't even feel the need to bring it up. Those newspapers are just distracting; this is their only capital.

MISSING JOURNALISTS BEING CLOSELY FOLLOWED-UP: (Responding to a question regarding the two Turkish journalists that have gone missing in Syria.)
Our Ministry of Foreign Affairs is doing all they can to track our two comrades; the journalist and cameraman. We are following up closely and also warning the international community, especially Iran. We have requested and are requesting that they act sensitively on this issue and that they also personally track this situation, and leave no stone unturned.
SYRIA'S REFUGEES IN TENT CITIES TO BE MOVED TO CONTAINER HOUSING CENTER: We have prepared the area in Kilis to be a center for container housing. The infrastructure is practically complete. We will be moving our Syrian friends from the tent city into this new 'container city'. As of today, the number of Syrians that have fled to seek shelter in Turkey has reached 13,000 and they continue to come because the persecution still immensely continues.
Prime Minister Erdoğan held a dinner at the Prime Ministry Official Residence in Igor Lukšić's honor. The dinner, which was closed to the press, lasted for an hour and 15 minutes.