Turkey sets up temporary accommodation for influx from Syria 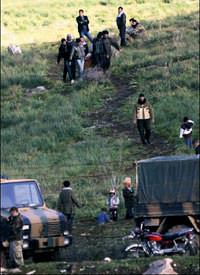 Due to the recent escalation of violence in Syria, thousands of people in border villages are flocking into Turkey.

Syrian refugees, primarily women and children, are greeted by Turkish soldiers at the border and then taken in tractor trailers to the gendarmerie station. After they are registered at the station, they are then transported by minibus to the camps set up in Hatay. Deputy Prime Minister Beşir Atalay announced yesterday that over 1,000 Syrians have entered Turkey over the past 24 hours, bringing the total number of refugees up to 15,000.


President of Turkey's Red Crescent Ahmet Lütfi Akar states, "We have seven tent cities set up along the Hatay border, where we are currently hosting almost 14,000 guests." Expressing concerns there may be more people needing shelter, Akar states, "Of course this is an extreme situation. We are expecting more people to cross in from Hatay in the upcoming days. However, there are a variety of scenarios which predict figures could reach 500,000. A while back, UN Coordinator for Humanitarian Affairs and Emergency Relief Valerie Amos came to Turkey and we held a special meeting to determine our capacity and they stated that measures would be taken accordingly."

Fifty additional tents have been added to the temporary tent city set up in Hatay's Reyhanlı district, bringing the number of people staying there alone up to 595.
An additional 228 Syrians that entered from Reyhanlı, were set up in a sports center in Gaziantep. Infrastructure preparations have been ongoing for two days now in order to prepare the Department of Agriculture Enterprises (TİGEM) land in Şanlıurfa to accommodate a significant number of tents.