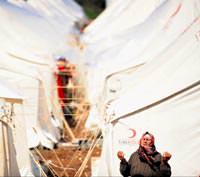 With the heavy increase in numbers of Syrians crossing the border this week, Turkey is in full preparation mode in order to accommodate potential waves of high numbers of refugees. Turkey’s Red Crescent Director Akar states, "We are now ready for 70,000 people. We have bought new machinery for our facilities and have doubled our tent production.”

The numbers of refugees coming to Turkey from Syria has increased exponentially with the intensification of military attacks on the Syrian public. Estimations are that the number of refugees may increase to 500,000, which has put Turkey's Red Crescent on full alarm in order to be able to provide tents for accommodation. Red Crescent Director Ahmet Lütfi Akar states, "We can easily accommodate 70,000 refugee guests at present. We may establish a buffer zone along the border."

Akar explained that in Hatay, there are currently facilities to accommodate 15,000 and stated, "We have also set up a 2,000 container (temporary housing) camp in Kilis. The water and electricity connections are currently being made. We have also transported 8,000 tents to the region."

Akar also emphasized that the Ankara Red Crescent facilities have increased their capacity for tent production. "We were producing 100 tents a day and now we are producing 200 tents. We have purchased new machinery. I expect that by the end of next month, we will have enough stock to accommodate 15,000 people. We have also held a tender to contract tent production; therefore we are not facing any difficulties."

There were an additional thousand Syrians that took shelter in Hatay the day before yesterday, which brought the total number of refugees up to 16,000. While efforts to set up additional camps are ongoing, Turkish officials state that they are ready to accommodate a potential wave of refugees. Syrians continued to flow into Turkey yesterday and the night prior. Amongst those fleeing Syria was stated to be a general, bringing the total number of high-level Syrian military defectors in Turkey up to eight. When the camps in Hatay reached capacity, 460 Syrians were sent to Gaziantep's İslahiye district, where a sports center has been set up for accommodation and to provide clothing, food and medical assistance. As of noon yesterday, there were 668 Syrians in the İslahiye Sports Center.

Suphi Ezer; a 45-year-old truck driver who was shot in the chest in Syria has been released by Syrian officials and brought to a hospital in Gaziantep. Meanwhile, Hasan Koçak (48) another Turkish truck driver who lost his life, was buried in Hatay's Demirköprü village.