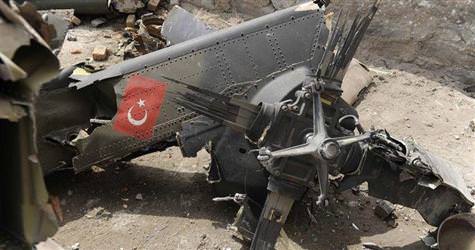 A NATO helicopter crashed into a house on the outskirts of the Afghan capital, Kabul, on Friday, killing 12 Turkish soldiers on board and four Afghan civilians on the ground, Turkey's military and a senior Afghan police official said. Initial findings point to a technical failure.

Turkey is mourning the loss of 12 soldiers killed in a helicopter crash in Afghanistan. Nine Turkish officers, two petty officers and one specialist sergeant were aboard the Sikorsky type helicopter, when it crashed into a home, killing four civilians inside. According to initial findings, just five minutes after the helicopter took flight it was forced to make an emergency landing, when it crashed. The twelve soldiers are expected to be buried in Turkey today.

"Twelve of our military personnel on board the helicopter have been martyred," the Turkish general staff said in a statement in Ankara. A team had been sent to the scene to investigate, it said. Wreckage as well as corpses and body parts littered the site. Relief workers and Turkish soldiers covered bodies with red and purple blankets on the ground in front of a smoking hole in a two-storey house.

Two women and two children were among those killed when the helicopter crashed into the house, an Afghan police officer said. The officer said the cause of the crash appeared to be a technical fault. NATO's International Security Assistance Force said earlier that the cause of the crash was still unknown but that there had been no reports of insurgent action in the area. Turkey's foreign minister also said the cause was apparently a technical fault. "Both the location and the way the crash happened makes the impression that it's due to technical failure," Foreign Minister Ahmet Davutoğlu told reporters in Istanbul. "It's a cause of great pain; I am sending my condolences once again to the families and the general staff."

The crash came amid growing unease among NATO partner countries about the increasingly unpopular and costly war nearly 11 years into the conflict as most foreign combat troops set to leave Afghanistan by the end of 2014.


Turkey's mission in Afghanistan is limited to patrols and its soldiers do not take part in combat operations. It has more than 1,800 soldiers serving in the country, most of them around
the capital.
Unlike other NATO countries, public opinion in Turkey has been less critical about having troops in Afghanistan, given their non-combat role. Nor is there as much resentment among Afghans over the Turkish presence, because they are fellow Muslims and due to the historical links between the countries.
In January, six U.S. Marines were killed in a helicopter crash in southern Afghanistan, which followed the death of 30 American personnel, including 22 Navy SEAL commandos, in eastern Afghanistan in August last year. An investigation into the August incident confirmed the Taliban had fired a rocket-propelled grenade that hit one of the rotary blades and exploded, sending the helicopter plummeting to
the ground and bursting into flames.
On Thursday, in a blow to NATO hopes of a negotiated end to the decade-old war, the Afghan Taliban said they were suspending nascent peace talks with the United States, following the massacre of 16 civilians by an American soldier. The U.S. government said it remained committed to political reconciliation involving talks with the Taliban but progress would require agreement between the Afghan government and the insurgents.