'Syria's solution should originate from the region' 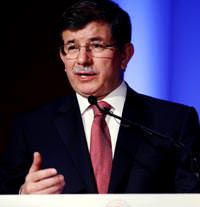 Speaking to ‘The Cairo Review’, Davutoğlu stated that in order to resolve the crisis in Syria, the formula must originate from the region, yet have the broad participation of the international community.

As Turkey, we tried everything first at the bilateral level, then in coordination with the Arab League, and lastly at the UN Security Council in order to resolve the crisis in this country. We now need to work for an international platform on Syria, originating from the region and with broad participation of all related members of the international community.

In an extensive interview in The Cairo Review, a publication released quarterly by the American University in Cairo's School of Global Affairs and Public Policy, Foreign Affairs Minister Ahmet Davutoğlu expressed that the situation in Syria now poses a threat to international peace and security and that it was time the international community reassess its options. During the interview, Davutoğlu stated that a solution should originate from the region and be implemented with the participation of the international community. Answering questions on Turkey's foreign policy and regional developments, Davutoğlu stated that following:

A MESSAGE TO ASSAD

Against this background, President Assad and his close entourage have the primary responsibility for the current crisis, which, unfortunately, ravages the country in front of our eyes. It is again in the hands of President Assad to end the bloodshed and to initiate a peaceful transformation process in the country through full implementation of the Arab League's initiative and roadmap.

(On the Cyprus issue) Now, with the approaching Greek Cypriot EU presidency in the second half of 2012, the window of opportunity narrowed considerably. Despite this, the Turkish Cypriot side will continue its determined efforts and we will continue to fully support them. There is still some hope: if the assessment of the process to be provided by the secretary-general's special adviser Mr. [Alexander] Downer in March is positive, the secretary-general intends to call a high-level meeting in late April or early May. This could finally produce a settlement agreement, enabling the new partnership to be established in Cyprus to assume the EU presidency on 1 July.