Even if NATO withdraws, Turkish soldiers will remain in Afghanistan 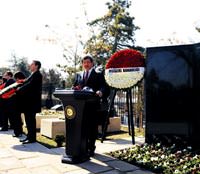 The 12 Turkish soldiers killed in an airplane crash in Afghanistan were headed to protect personnel in charge of building an orphanage.

It turns out the 12 Turkish soldiers that were killed in Afghanistan Friday, when their helicopter crashed into a house near the capital, were actually destined to fulfill a very meaningful task. The soldiers had been assigned to protect personnel building an orphanage as well as to assist in surveillance.

There are approximately 1,900 soldiers from the Turkish Armed Forces included in the ISAF in Afghanistan. In addition to providing security, these military teams also assist in development projects, the first of which was in Vardak in 2006. In four years' time, 120 projects were brought to life, including schools and medical centers.

In 2010, a second construction team was assigned to Cevizcan, which is located near the border with Uzbekistan and Turkmenistan. Turkish soldiers have been operating in the region for a year and a half now and have realized 35 projects thus far, including establishing district administration units, building training areas for Afghani police and setting up medical and education centers. Amongst the projects still in line are building a mosque, a veterinary clinic, digging up water wells, laying asphalt on local roads, building an agricultural vocational school as well as building two separate dorms for children that have been left orphans. Turkish soldiers are assigned to these development projects to both protect the team in place as well as to train Afghan soldiers. On March 16th, the 12 soldiers boarded a Sikorsky helicopter headed for Cevizcan in order to protect the team assigned to building the dorms and to assist in surveillance. The helicopter crashed just after departing from Kabul and killed all 12 soldiers aboard. A ceremony will be held for five of the soldiers killed in the line of duty at the Kocatepe Mosque and will be attended by state leaders.

YILMAZ: EVEN IF NATO WITHDRAWS, TURKEY WILL REMAIN IN AFGHANISTAN

Minister of National Defense İsmet Yılmaz states, "Even if NATO withdraws from Afghanistan, Turkish forces will remain in the country." Yılmaz was answering questions from the press upon his departure from paying a visit to the family of Major Şükrü Bağdatlı, one of the soldiers killed in the crash.

"We will be there for as long as Afghanistan wants us to be. If Afghanistan is in a difficult position, then Turkey will help. If Turkey was in the same situation, Afghanistan would help. Even if NATO withdraws, Turkey will continue to have a presence in Afghanistan."