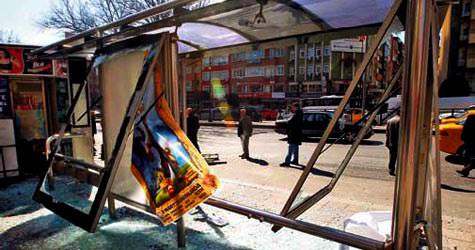 The PKK got an early start on Newroz celebrations for the Kurdish New Year, which begins March 21st, in what turned out to be a sort of ‘rehearsal for revolt’ on Sunday.

Buildings and public transportation vehicles were set on fire in an array of violent disruptions on the streets. Demonstrations in both Istanbul and Diyarbakır provinces raked in three million liras worth of damage.

An illegal demonstration in Istanbul's Kazlıçeşme neighborhood resulted in mayhem for the city's residents. The greatest damage done was to the city's bus stops and public busses, used by thousands every day. Stores and telephone booths were stoned, trees were set on fire. The entire Zeytinburnu area and its vicinity was transformed into a battlefield. Demonstrators, who were not allowed to enter Kazlıçeşme Square, instead stoned tramway and bus stops as well as public busses themselves. Barricades were set up by demonstrators using Molotov cocktails to set trash cans on fire. Local residents had fear instilled in them as they found themselves unable to walk their neighborhood streets or stuck in cars surrounded by violence. In Diyarbakır things weren't much different, as paving stones were ripped apart and vehicles set afire. Witnessing citizens complained of the destruction incurred on public property.

Demonstrators that came out to stage illegal early celebrations of Nevroz, exerted excessive violence on public property, stoning surrounding stores, busses and bus stops and by setting trees on fire. According to initial findings, due to Sunday's illegal and violent Nevroz celebrations, the damage incurred to Istanbul's public transportation system thus far is one million, 80 thousand liras.

Public transportation was forced to reroute during the day and a total of 39 busses and metro busses were stoned and damaged in Sunday's demonstrations. Spanning from Yenikapı to Zeytinburnu, 42 bus stops were destroyed by demonstrators. Six tramways from Istanbul's light rail system were damaged and windows were stoned in countless numbers of wagons. The light rail system alone incurred a total 200,000 liras in property damage and 250,000 liras in operating costs. The damage cost of one bus set on fire was 30,000, while the total operating losses incurred were 126,000 liras. Including service and parts, repairs will cost 74,445 liras, bringing the total damage incurred by the city's public bus system to 230,445 liras. The damage incurred on public bus stops alone was calculated as 168,000 liras. The entire total damage incurred on public transportation reached approximately one million, 80 thousand liras. There were also 135 arrests made in Istanbul during Sunday's Newroz celebrations.

Despite the Diyarbakır Governorship's announcement that Newroz celebrations would not be permitted on Sunday, BDP's insistence resulted in mayhem on the streets. In especially concentrated demonstrations in Diyarbakır's Bağlar and Kayapınar districts, one policeman's arm was broken and another was wounded from being hit in the head with a stone. Demonstrations went on until the evening hours and ten people were arrested. In Nevroz Park, demonstrators set fire to telecommunication vehicles that were there to offer services to those celebrating the Kurdish New Year. Eleven mobile base stations were destroyed, resulting in approximately two million liras in damages.

Police investigative work into the violent demonstrations shows all fingers point to the PKK. Intentions in Istanbul were to have everyone gather in the same location, while in Diyarbakır and Yüksekova, the demonstrations were intended to act as a sort of 'rehearsal for revolt'. It turns out, a series of explosives which Istanbul police tracked down in three separate locations, were in fact intended for Newroz celebrations, with the direct order coming down from Kandil; 'This Newroz should be a bloody May Day.' In fact, according to the intelligence obtained from Kandil, Sunday's Newroz demonstrations were intended to be the first leg of a series of events to come planned by the PKK.

ÇELİK: NEWROZ IS SHARED BY ALL OF US

Commenting on Sunday's developments, AK Party Deputy Chairman Hüseyin Çelik stated, "The March 21st Newroz holiday was not something created for Abdullah Öcalan. Spring is not just for the Kurds, or the Turks or the Brits, spring is for everyone." Noting that there are thousands of Kurds in Turkey, Çelik went on to state, "The AK Party government has always provided for a significant portion of their rational and legitimate demands. Reforms were not made just because the BDP or the PKK wanted them. We want our Kurdish citizens to be first class citizens of this nation. We are all in the same boat. If everyone acts according to this responsibility, there wouldn't be any problems to begin with."