Turkey is a strong country that is open to the world 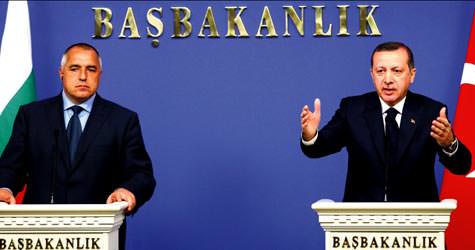 Responding to the recent criticism by the opposition of Turkey’s military involvement in Afghanistan, Prime Minister Erdoğan said, "Turkey is a strong country and this is one of the requirements of being a strong state.”

Prime Minister Recep Tayyip Erdoğan was speaking at a joint press conference with his Bulgarian counterpart Boyko Borisov when he responded to recently surfaced criticism of Turkey's presence in Afghanistan following the death of 12 Turkish soldiers in a helicopter crash last week. "It's very sad to see certain attempts made to exploit this situation," said Erdoğan. "Do they want this to be a withdrawn boutique state? Well, Turkey is not a boutique state; it is one that is strong and open to the world."

Prime Minister Erdoğan went on to deliver the following messages in response to questions from the press during the joint press meeting:

INITIAL FINDINGS POINT TO TECHNICAL MALFUNCTION: (In response to the question of whether the cause of the crash has been determined) "The investigation is still ongoing; however initial findings point to a technical malfunction as the cause for the helicopter crash. Any sort of conflict is not a possibility. Once the report has been completed it will be released to the public."

EXPLOITATION IS SAD: "When it comes to the other issue, it is very sad to see certain attempts made to exploit this situation. That same helicopter could have crashed in our own country. We are currently involved in a NATO community and it is within this framework that the TAF is serving in Afghanistan. However, for as long as we have been there, we have never taken on any sort of operational duty, we have been primarily taking on logistics tasks. We haven't lost a single soldier in conflict there; this recent loss was the result of a crash."

THE ISSUE IS SOLIDARITY: "The issue here is our solidarity with the Afghan public.
They were with us in our difficult times, when we fought for independence. Not only is the Turkish Armed Forces fulfilling its historical duty, but its presence in Afghanistan is also due to its NATO involvement."

WE WILL NOT REMAIN THERE FOREVER: "Of course our military will not remain there forever. We will withdraw our troops when the time comes. These sorts of decisions are made through a parliamentary ruling at Turkey's Grand National Assembly. This is what is done here. What is it that those politicians or writers want when they question our involvement? Do they want this to be a withdrawn boutique state? Well, Turkey is not a boutique state; it is one that is strong and open to the world. This is something we have to do as a requirement for being a strong country."

Erdoğan went on to request that nobody attempt to exploit this situation and pointed out once again that these soldiers were killed in a crash and not as a result of conflict.

During Erdoğan's meeting with Borisov, both one on one and with mutual committees, 14 agreements were signed between the two countries in areas including economy, military, transportation and culture. Erdoğan and Borisov also agreed that Turkey will provide natural gas to Bulgaria should they face difficulties in the harsh winter conditions. In addition, Erdoğan and Borisov signed an agreement on forming a High Level Strategic Cooperation Council and Erdoğan announced that the second High Level Strategic Cooperation Council meeting will be held in Sophia this year.