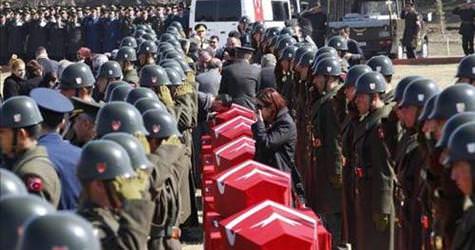 The 12 Turkish soldiers, who were killed in the line of duty last week when their helicopter crashed into a house near the capital of Afghanistan, were laid to rest in an official ceremony held yesterday.

The funeral ceremony for the 12 soldiers also marked a series of first's for the nation's military tradition. For the first time ever an imam was present to end the ceremony with a prayer. In another first, police were in uniform and on duty at the ceremony. There were two ceremonies held yesterday, one at the Kocatepe Mosque and the other at the 4th Army Corps Command in Ankara, both were attended by high level members of state.

The Eşref Akıncı Barracks, which was the same site where the soldiers were first sent off to Afghanistan to join the peacekeeping forces six years ago, was the scene of heartbreak yesterday. The families of the martyred soldiers embraced the coffins of their loved ones and sobbed relentlessly. After President Gül offered his condolences, the official ceremony commenced. In an address, Peace Forces Brigadier General Mehmet Karadayı stated the following: "Your sons who chose this holy profession, became our own sons, our own brothers, the day they joined the Turkish Armed Forces. In fulfilling our duty of securing peace and stability in Afghanistan, the Turkish Armed Forces has gained the respect of our allies and won the hearts of the Afghans. We swore that we would sacrifice our lives for this nation. Now sleep in peace in the shadow of the flag that you lost your life for."

The ceremony held at the Eşref Akıncı Barracks marked the first time an imam has delivered a prayer service at a military funeral ceremony. During the ceremony, Imam Halil İbrahim Taşçı read a prayer which states, "do not call those killed in their service to God dead, because they are still alive. However, you are not aware of that higher being." All of the TAF members present opened their hands in prayer. What followed however was heartbreaking. When the ceremonial speeches came to an end, the soldiers' children, whose ages ranged between 6 to15 sought out their father's coffin and embraced them for a final time in tears.

Religious Affairs Directorate President Mehmet Görmez led the funeral prayer ceremony which was attended by President Abdullah Gül, Speaker of the Parliament Cemil Çiçek, Prime Minister Tayyip Erdoğan, CHP leader Kemal Kılıçdaroğlu, Chief of General Staff Necdet Özel, President of the Constitutional Court Kılıç, a number of ministers, commanding officers, relatives and loved ones of the soldiers and a high number of military members and police who were all present to mourn the soldiers and usher them off onto their final journey. Following the prayer ceremony, Görmez stated that the 12 Turkish soldiers killed in the tragic helicopter crash died while trying to bring peace and aid to the Afghan people."