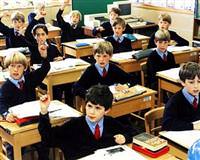 Turkey’s National Education Ministry has now granted the right for children of Armenian Greek and Jewish minorities to attend minority schools even if they are not Turkish nationals.

In an effort to grant further rights to Turkey's minority groups, the Ministry of National Education has made a number of amendments to Private School regulations, including lifting the clause that previously stated, "Minority schools can only be attended by children of Turkish citizens that belong to the school's specific minority group."

One highly debated clause in the past; providing the option of having an Atatürk Corner designated at private schools, has now been made a mandatory requirement.