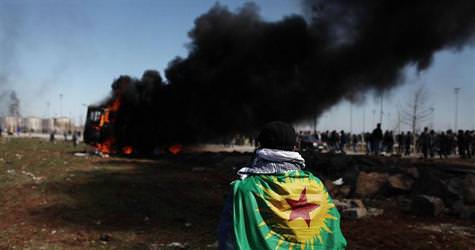 Murat Karayılan, number one in the PKK’s military wing, issued the order for militants to transform Nevruz celebrations into a revolt.

Conducting an investigation into the recent illegal demonstrations for Nevruz, Istanbul's Special Authority Chief Public Prosecutors Office has uncovered that it was Murat Karayılan, the PKK's urban wing KCK's Executive Committee Chairman, who gave the order for Nevruz celebrations to be transformed into arson and rioting.
Tension escalated on March 18th, when a series of illegal Nevruz celebrations transformed into violence. In Istanbul, 107 people were arrested and millions of liras worth of damage incurred on public property. An investigation opened into the incident for "participating in activities under the order of a terrorist organization" and "for disrupting public order and damaging public property" has unveiled a very interesting finding. According to information obtained in the investigation, it was Murat Karayılan who was responsible for giving the order that would transform Nevruz into chaos.
The Chief Public Prosecutor has acquired evidence that the events that transpired that day were coordinated by the KCK's main command center. Militants received Karayılan's orders via a website that broadcasts on behalf of the organization. Karayılan's orders were for militants to stage demonstrations in Diyarbakır and Istanbul which would transform celebrations for the Nevruz into a violent revolt with rioting. It was especially requested that demonstrations be even more 'eventful' than last year.

THERE WERE EVEN CERTAIN SLOGANS SUGGESTED

The orders included a request that the slogan "Edi Bese, An Azadi An Azadi" (Enough already, either freedom or freedom) be used in the demonstrations and for events to turn into a "Serhildan" (rebellion) in order to establish a conflict environment and to provoke police and soldiers. Private and public property was destroyed as part of the intentions to conspire chaos.

The details of why Nevruz celebrations were limited to March 21st, is due to the fact that the PKK had intentions for demonstrations to last a week and was even establishing mobile provocation teams.