A nuclear lesson from Erdoğan 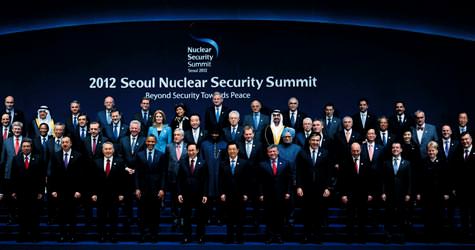 During the Nuclear Summit in Seoul, Prime Minister Erdoğan stated, “Nuclear terrorism is the most significant threat. Military nuclear facilities and stocks are also under threat of terrorism. A significant number of nuclear reactors throughout the world have completed their lifespan. However, the right to access nuclear technology for peaceful purposes should not be hindered.”

THE JAPAN EXAMPLE: After the Chernobyl and "Three Miles Island" nuclear disasters, what happened in Fukushima has proven once again the crucial importance of nuclear security.
At present, approximately 30 countries have nuclear power reactors. According to the International Atomic Energy Agency (IAEA) there are 60 or so nations actively interested in establishing nuclear programs. Meanwhile, the IAEA has reported that 80 percent of the nuclear power reactors throughout the world are over 20 years old, some having already completed their lifespan. It is especially important that the maintenance of these facilities is kept at an optimal level.

ENVIRONMENTAL PROTECTION IS MANDATORY: Potential nuclear and radiological disasters could have limitless results. The highest level of nuclear security must be established in order to protect, the public, the facilities themselves and the environment. When it comes to our nuclear power production programs, as leaders, our primary responsibility is ensuring the public's safety.

LET US SHARE OUR EXPERIENCES: As Turkey, we are working with industrial partners that support and have established the highest level of nuclear security and safety standards. We should share all the knowledge and experience we have on ensuring the safe use of nuclear energy for the benefit of the international community.

NUCLEAR TERROR IS A SERIOUS THREAT: Nuclear terrorism is one of the most serious threats to global security and stability. The catastrophic results of nuclear and radioactive materials being in the hands of actors outside of the state has the same level of validity for all nations. We need to act together in order to prevent this sort of threat.

A WORLD RID OF WEAPONS: Turkey continues to uphold its commitment to its objective of establishing a world without nuclear weapons and the principle of nuclear energy being used for safe and peaceful purposes.

ENERGY USED FOR PEACEFUL PURPOSES SHOULD NOT BE OBSTRUCTED: We support the rights of a nation which has fulfilled all international obligations in regards to establishing their own nuclear program to be able to benefit from the use of nuclear energy. The preventative measures we establish here should not pose an obstruction in any way to the peaceful use of nuclear energy. This is of vital importance for nations such as Turkey which require nuclear power in order to fulfill their national energy needs.

2030 VISION: Turkey is currently in the position of being Europe's sixth and the world's 16th largest economy. The focus of our development strategy involves benefitting from safe, low-costing and environmentally sensitive energy resources. Turkey has begun a competitive nuclear power program. And this program will be determinedly implemented in order to provide for the nation's energy needs in a sustainable manner. Our objective is to ensure that ten percent of our energy is provided by nuclear power sources by the year 2030.

A WARNING TO MILITARY FACILITIES: We will be providing the highest safety standards in accordance to international and IAEA requirements in the implementation of our nuclear power program. According to reports, the nuclear material stock on a global level is enough to create 120,000 nuclear weapons or explosives. Over 60 percent of these materials are stated to be used in military programs. Military facilities and stocks are certainly not immune to the threat of terrorism. We must ensure that safety is secured at the same maximum level.

DISARMAMENT IS A JOINT RESPONSIBILITY: We must never forget the potential risks involved with the fact that as long as nuclear weapons exist, they could be obtained by unauthorized parties. As a result, it is all of our joint responsibility to reach the objective that the number of nuclear weapons be decreased and eventually eliminated.