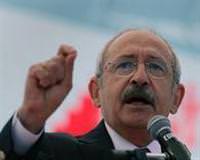 CHP, Turkey’s main opposition party, claim that the flexible system to be implemented in Turkey’s educational system will erode the national education policy.

According to the Kemalist opposition party the Republican People's Party, or CHP, the new model for reforms in Turkey's education system is equivalent to the systems in place in a number of nations, including Germany, and is not appropriate for Turkey. According to CHP, Turkey needs to develop an educational system model that is more nationalist and specific to the nation. Opposition leader Kemal Kılıçdaroğlu states that educational reforms should be debated for at least 15 years, and says there is no need to hurry.

A total 120 civil society organizations under Turkey's Volunteer Organizations Foundation (TGTV) umbrella, banded together in order to announce their support for Turkey's new education system, commonly referred to as the 4+4+4 model.

TGTV Chairman Hamza Akbulut stated, "As the TGTV, even though it may not include all of the changes we would have hoped for, we are supporting the gradual education law draft because it will initiate a new era for education. This resolution will lift the inequality in the coefficient system; it will pave the way for vocational schools, offer the opportunity for students to select areas of preference and will allow the possibility for everyone to be able change their areas of study at any stage." Akbulut expressed that their additional requests were for "the option of general education to be provided in the second four-year term, for coeducation to not be imposed and for students to be able to choose their own style of dress at every stage of the system."
Emphasizing that the reforms are being made according to the requests of educators and the Turkish public and therefore it is irrational to contest them, Chairman of the ENSAR Foundation Cenk Dilberoğlu stated that like every issue in democratic societies, the education system is formulated according to society's needs and demands and expressed, "we find these reforms to be innovative and at international standards."