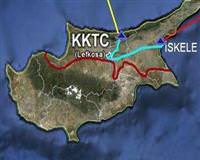 Minister Eroğlu stated the following: "The decision has been made by Prime Minister Erdogan for Turkey to deliver 75 million m³ of water annually to Northern Cyprus. We, in turn, immediately began working on the project; after all it is an extremely significant one. This is the project of the century, and one that is worth approximately 500-600 million dollars.

We are building the extensive Alaköprü dam in Anamur. From there, we will be providing water to the vicinity while at the same time will be delivering 75 million m³ of water over land and later by sea to Northern Cyprus. Plans are to build a pumping station in Güzelyalı and from there we will be pumping to the Geçitköy Dam. From Turkey water will provided from the Alaköprü Dam and transported to the Geçitköy Dam in Cyprus. A ground-breaking ceremony for the Alaköprü Dam was held on March 7th, 2011 by Prime Minister Erdogan and the Turkish Republic of Northern Cyprus Prime Minister Irsen Küçük. Right now the project is advancing with momentum.

The second priority was the Geçitköy Dam, the tender of which has already been held. This March 3th at 15:30 we will be holding a ground-breaking ceremony for the Geçitköy Dam, which will be attended by The Turkish Republic of Northern Cyprus President Derviş Eroğlu and Prime Minister İrsen Küçük as well as our Deputy Prime Minister Beşir Atalay and myself. We hope to be finished by next year at the latest. Our Prime Minister has an order for us to begin the flow of water to Northern Cyprus by March 7th, 2014 at 13:00 precisely.

It is a difficult project; we are working night and day. We are all dreaming about this project and it has entered my own personal dreams. Up until now the progress has gone well. We have held tenders for both dams. On one, construction is still ongoing and on the other we will be laying the foundation. Afterwards, in the upcoming month, we will begin setting up an 80 km structure to begin delivering water by sea. For the first time ever in the world, we will be suspending a pipeline to provide water to Northern Cyprus."