'The tyrant cannot be equated with the victim' 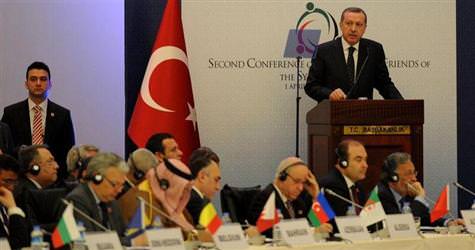 Speaking at the second Friends of Syria Group meeting held in Istanbul, Prime Minister Erdoğan stated that Assad has yet to keep any of the promises made, and requested UN intervention should the regime refuse to cooperate.

Prime Minister Recep Tayyip Erdoğan expressed that should the Syrian regime fail to cooperate then it will be the U.N. Security Council's inevitable duty to put an end to the massacres and stated, "a Security Council that has not yet said 'stop' to a violent regime that massacres the innocent and bombards their own cities, is obviously incapable of securing international peace and security."


Speaking at the second Friends of Syria Group meeting held in Istanbul, Erdoğan stated the following:

'YOU ARE NOT ALONE'

I want to acknowledge the Syrian heroes that have committed to an extraordinary struggle in the face of the most heartless attacks with modern weaponry transpiring in Syrian cities. I want to remind our brothers in Syria once again from Istanbul that they will never be alone in their struggle for independence and will never be left to their fate.

As Turkey, we have no intentions of intervening in any regional nation's internal affairs. Quite the contrary, we are the strongest defenders of peace and stability in the region.

Syria has not yet fulfilled the promises made to Annan. The regime continues to kill. Up until now, this regime has never kept any of the promises made. We want the Syrian public's demands to be realized immediately. Syrians should be granted a democratic election conducted under the security and control of the international community. I hope that the Syrian public will succeed in this. I believe that the people of Syria will be able to determine their own fate and establish their own route. No one should have any doubt that sooner or later the price will be paid for the loss of innocent lives.

Because we are well aware of the unrest in Syria, we have expressed time and again that Assad needs to take a step in order to ensure that the painful events that transpired in Syria, Egypt and Libya do not continue. Unfortunately, the promises made to us by the Syrian administration were not kept. Just as they refused to keep their promises made to us, they have continued as in the past, to eradicate the public's legitimate demands through violence, oppression and intimidation. After suffering the heavy oppression up until recently by Assad the father, unfortunately now they are being subjected to oppression and mass executions by his son.

In the events which have transpired in Syria over the past year, according to figures from the United Nations over nine thousand people have lost their lives (however, I now see that this figure has increased exponentially). Hundreds of thousands of people have been displaced, with tens of thousands seeking shelter in neighboring countries. As of yesterday, the number of Syrian refugees in Turkey reached 20,000. In areas besieged, basic needs such as for food, medicine and fuel has reached unprecedented levels.

Those forced to leave their country are currently in a more advantageous position then those who remained. We are hearing that due to operations staged with heavy weaponry, tanks, cannons and air attacks, there is great suffering in cities such as Damascus, Aleppo, Homs, Hama, Dera and Idlib. With the Syrian administration having closed off the nation to humanitarian aid and members of the press, we do not know precisely how deep the suffering is. Untargeted weapons are unfortunately hitting our journalists and killing members of the press. Meanwhile, we are still having great difficulties acquiring information on two Turkish journalists that went missing in Syria.

'HE IS TRYING TO BUY TIME'

The UN and the Arab League rulings have both clearly designated the roadmap to be followed in order to overcome this crisis. Of course, from the bottom of our hearts, we hope that the efforts put forth by the UN and Arab League Envoy Kofi Annan reaps results. However, it is most likely that the Syrian administration, which has made promises to both us and the international community as a whole in the past and refused to keep them, is using Kofi Annan's initiative as a means to buy time.
We absolutely believe that this mission, supported by the UN Security Council's March 21st announcement, must now be allowed to be manipulated by the Syrian regime.

We also believe that it is important that this mission be made compatible with the efforts put forth by the Friends of Syria Group. Any initiative that equates the tyrant with the victim will only buy time for violence. Every initiative made that does not involve an affective surveillance mechanism or a determined timeline for a political transition will only promote the Syrian administration's use of violence.

Should the Syrian regime not provide the necessary cooperation, then it will become an inevitable necessity that the UN Security Council take on the responsibility that befalls them and say stop to the massacre in Syria. If the Security Council refrains once again from taking on this historical responsibility, then the international community will have no other choice then to support the Syrian public's right to self-defense.

A Security Council that has not yet said 'stop' to a violent regime that massacres the innocent and bombards their own cities, is obviously incapable of securing international peace and security. We believe that the international community has a moral obligation when it comes to the ongoing oppression in Syria.

We are here together today in Istanbul as a necessity for moral responsibility and humane and conscious values. We are pushing away any sort of concerns of benefitting, and are here today in order to find a way to save lives.

The message that we deliver here and today to the Syrian administration must be clear and absolute.