Clinton receives a lesson on Sunni and Shiite 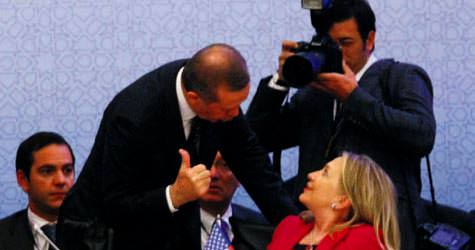 Speaking with U.S. Secretary of State Hillary Clinton on Iran, Prime Minister Erdoğan explained the difference between fatwa, which refers to Islamic religious law, for Sunnis and Shiites and stated, “Shiites’ fatwa is never questioned and we are obliged to believe it.”

After meeting with U.S. President Barack Obama for a two and a half hour meeting in Seoul, Prime Minister Tayyip Erdoğan continued on to Tehran, where he held a series of meetings including with Iranian President Ahmadinejad, then on Sunday he hosted U.S. Secretary of State Hillary Clinton for a meeting which lasted approximately two hours. Iran's nuclear activities was the main topic of discussion and during the meeting Erdoğan explained to Clinton the difference between Sunni and Shiite fatwa, which refers to Islamic religious law.

Following Prime Minister Erdoğan's meeting with Iranian President Mahmud Ahmadinejad, the Iranian Presidency released an announcement which stated, "The Turkish government and public has always supported the Iranian Islamic Republic's nuclear position and will continue to closely follow the same policy in the future." As Erdoğan was headed to Meshed, his team was concerned when they heard the statement. During the meeting with Clinton, Erdoğan referred to the announcement released by the Iranian administration by stating that Turkey's stance had not been accurate reflected. "We are against all forms of nuclear weapons, whomever they belong to," stated the Prime Minister.

Erdoğan went on to explain the difference between his visits to Tehran and Meshed, the holy city of Shiite Muslims and stated that they had to believe the statements made by Iran's spiritual leader Ali Khamenei. "Fatwa varies for Sunnis and Shiites," explained Erdoğan. "In the Sunni belief fatwa's are given, and to recognize them is something else. However, in Shiite belief the ulema's words, and the decision's made by the Guardianship of the Jurist is never contested. During my meeting with Khamenei, he told me that their fatwa was that 'Our religion does not allow weapons of mass destruction', and that is right. They said they would not be making nuclear weapons and we have to believe that."

While Erdoğan emphasized that they were against nuclear weapons, regardless of whom they belong to, Clinton expressed that she was not expecting a result to come out of the April 13th nuclear negotiations to be held in Istanbul and stated, "However, we will be in Istanbul to ensure that they do not think that we are evading the meeting. If they are not building nuclear weapons then why do they continue to produce enriched uranium, this is what we do not understand. If they are not making nuclear weapons, then they should be open to inspection and let this situation come to an end. Iran's true intention is solely to gain time."

A QUESTION ON ASSAD

Clinton also met with Foreign Affairs Minister Davutoğlu in order to discuss the situation in Syria, during which Clinton expressed that the United States has no intentions to rush the situation in Syria and asked, "If Assad goes, who will lead the administration? The opposition is not unified. We have reached the limits of all we can do and we do not want military intervention."
While Clinton pointed out that the Syrian opposition has not gained enough strength, Davutoğlu requested support for the Syrian National Council to gain legitimacy. Davutoğlu expressed that the effects of years of pressure enforced on the public by Syrian intelligence is now evident in the opposition and that they did have a weakness when it comes to organizing. Davutoğlu went on to reiterate his request that support be granted for the opposition to gain legitimate recognition.
Clinton later met with five representatives from the Syrian national Council. Meanwhile, responding to questions on Euronews, Davutoğlu stated, "If the crisis continues in Syria, the entire region, and not just Turkey, will face great difficulties."