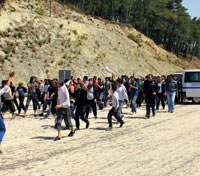 With fire ringing on the border with Syria, Ankara is now on full alarm and has told Syria’s Charge d'Affaires to “stop firing immediately”. Turkey’s Foreign Ministry states, “We will take measures if the situation repeats itself” while Deputy Minister of Foreign Affairs Naci Koru warned Assad by stating, "April 10th was the statute of limitations, as of tomorrow a new era begins.”

The firing by Syrian troops along the border at refugees trying to seek shelter in Turkey has resulted in escalating tension. When, in addition to two Syrians, a Turkish translator and police officer were killed, the first such event, Ankara went on alarm. Foreign Affairs Ministry Deputy Undersecretary Halit Çevik called Syria's Charge d'Affaires to warn that fire be halted immediately and to state that shooting along the Turkish border is unacceptable. After briefing Minister of Foreign Affairs Ahmet Davutoglu, who is currently in China, on the matter, Foreign Affairs Undersecretary Feridun Sinirlioğlu called Syria's Charge d'Affaires Mounzer Mounzer to his office in order to express that it is unacceptable to violate Turkey's hegemonic rights and that they maintain the right to self-defense.

A written announcement released by the Ministry of Foreign Affairs reads, "All Syrian nationals that have had to seek refuge in Turkey due to trying to escape the violence implemented by the current regime will be under our safekeeping." Meanwhile, Deputy Foreign Affairs Minister Naci Koru issued a warning to Assad by stating the following, "April 10th was the statute of limitations, as of tomorrow a new era begins." Koru expressed that due to the continuation of attacks over the past two days, the Annan Plan is obviously not being realized, and stated "We are evaluating whether this is an action from Syria directed towards us."

Victoria Nuland Spokesman for the United States Department of State condemned the opening of fire along the Turkish-Syrian border by Syrian Forces yesterday.

ALL EYES ON PARIS

With Assad's refraining from implementing the Annan Plan, all eyes have now been turned towards New York and Paris. During the April 1st Friends of Syria Group Meeting in Istanbul, the decision was made to form a Sanctions Working Group. The group is expected to meet on April 16th in Paris and to issue further sanctions against Assad. Also later this month, Paris will host the third Friends of Syria Group meeting. Meanwhile, with Assad failing to follow the Annan plan set for April 10th, the U.N. is expected to begin asserting increased pressure.

Syrians staying at the camps set up in Yayladağı staged a protest against Syrian forces opening fire against Syrians trying to cross the border for shelter.
ANNAN VISITS HATAY CAMPS
After being unable to pay a visit to the refugee camps in Hatay during his trip to Turkey last month, U.N. and Arab League Special Representative Kofi Annan, headed for Hatay today, specifically to pay a visit to the camps. During his four-hour stay in Hatay, Annan visited the Reyhanlı and Boynuyoğun camps and later headed to Iran. Deputy Foreign Affairs Minister Naci Koru states, "Annan will have the opportunity to hear firsthand from Syrians what is happening. Turkey is not alone on this issue."