Visas lifted between Brunei and Turkey 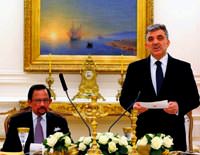 Turkey and Brunei signed agreements to lift mutual visa procedures yesterday during a visit by Brunei Sultan Hassanal Bolkiah to Ankara. Bolkiah states, “We want to bring the people of both countries closer together.”

The world's second richest king, Brunei Sultan Hassanal Bolkiah, whose full name is Sultan Haji Hassanal Bolkiah Mu'izzaddin Waddaulah ibni Al-Marhum Sultan Haji Omar Ali Saifuddien Sa'adul Khairi Waddien, was welcomed at the Çankaya Palace yesterday. Hassanal Bolkiah's first stop in Ankara was to pay a visit to Anıtkabir. Referred to as the "Gold Sultan", Bolkiah laid a wreath on Atatürk's mausoleum and then went on to write in the official Guest Book. Later, Bolkiah arrived to the Çankaya Palace where he was greeted by President Abdullah Gül with an official ceremony. Bolkiah notably refrained from wearing the kalpak, whereas the male journalists covering the meeting were wearing the traditional fur caps and the female journalists wore headscarves. After holding a meeting with mutual committees a signing ceremony took place in the Çankaya Palace for two agreements, an 'Economic, Trade and Technical Collaboration' and the 'Lifting of Mutual Visa Procedures'.

Both nations also decided to open permanent representation offices in each nation's capital. Also of note; the female members of the Brunei committee that attended the signing ceremony were wearing Turkish brand headscarves. Speaking at a press conference held following the signing ceremony, President Gül emphasized the importance of the Sultan's first visit to Turkey Reminding that Brunei is one of the richest countries in the world, Gül stated, "Despite the distance between Brunei and Turkey, both nations have always had sympathetic feelings for one another. We will transform these feelings into collaboration. Brunei uses its wealth by making international investments. We believe that they will include Turkey in their list of countries to invest in. We will be collaborating in the area of energy, and primarily gas."

Emphasizing that they signed two comprehensive agreements on visa regulations and economic collaboration, Gül also announced that they will also be releasing a declaration on collaboration in the defense industry. Bolkiah relayed how much he admired Turkey and stated, "We watch all forms of Turkey's progress in development with admiration. We hope that you will share your deep experience and expertise with our public." Bolkiah also expressed that the agreements will work to strengthen collaboration, and stated, "We want to bring both nations' publics closer together."