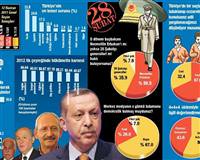 According to a social, economic and political analysis survey conducted by Genar Research on Turkey from March 24th to April 5th, if elections were held today, the AK Party would have 51.3 percent of the vote.

Prime Minister Erdoğan was selected as the most successful leader by 50.61 percent of those questioned. According to the survey, 31 percent of participants want to see Erdoğan become the president.

Survey participants selected Recep Tayyip Erdoğan by 30.6 percent as the top leader they want to see become president of Turkey in 2014. Kemal Kılıçdaroğlu followed with seven percent, Devlet Bahçeli came in third with 4.8 percent, Bülent Arınç was fourth with 4.4 percent and Deniz Baykal received 2.8 percent of the votes.

The survey also asked whether or not participants were familiar with the 4+4+4 education reform, which 74.1 answered affirmatively while 25.9 percent said they were unaware. While 56.4 percent of those knowledgeable of the reform supported it, 43.6 percent were not in favor. The actions of CHP's deputies while debating the mandatory 12 year education plan was also made a survey question. Sixty-one percent of those questioned found CHP's actions to be incorrect and an obstruction to democracy. Thirty-nine percent stated it was their democratic right. The question of whether Kurdish should be allowed as an elective course was responded to with 66.9 percent of participants against and 33.1 percent of participants in favor.

The survey also brought up the February 28th postmodern coup, with 56.5 percent of participants stating they found Necmettin Erbakan to be in the right, while 67 percent stated that the media's stance at that time was undemocratic.