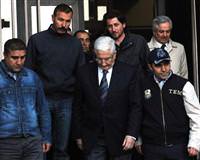 Four generals, including former deputy chief of staff Çevik Bir, which are being tried in connection to the February 28th post-modern coup, were put under pre-trial detention on Monday.

An Ankara court decided over the weekend that former deputy chief of staff Çevik Bir and other officers should be held under pre-trial detention to remove any risk of them fleeing, having ordered on Thursday they should be questioned over their role in the overthrow of prime minister Necmettin Erbakan 15 years ago.

The suspects are being held in prison at Sincan, a town outside Ankara where the military ordered tanks onto the streets in 1997 in what later became known as the "post-modern" coup.

"Those who have made this country pay great prices, put this country under great burden, will account for that before the courts," Erdogan said on Sunday.

"Everyone should understand that Turkey is not the old Turkey anymore. Turkey is no longer a country where anyone who gets up early can stage a coup," he said.

Only three out of the12 individuals transferred to the court due in connection to the investigation into the February 28th, 1997 coup conducted by Special Authority Ankara Chief Deputy Prosecutor were released, while the court has decided to hold the remaining nine in detention pending trial. The request for the detention of nine suspects, including retired general Cevik Bir was made after five and a half hours of questioning by the on call judge. Retired General Cevik Bir as well as the eight other suspects has since been transferred to the Sincan penitentiary. Meanwhile, the three suspects released pending bail, have been restricted from leaving the country. The nine suspects detained are being held due to evidence strongly pointing towards their involvement as well as being considered high flight risks. Cevik Bir and his potential accomplices are now being detained in the capital's Sincan penitentiary, the exact same location where they drove tanks to in a symbolic measure of what would later be considered the post-modern coup.

Police forces uncovered documents containing tabs of information indexing individuals which had been prepared during the February 28th period in a search conducted at the Gölcük Navy Command. Supposedly, Çevik Bir and the other detained retired military officers were questioned on how and why the documents were prepared.

According to the information obtained, Çevik Bir and the other retired officers were shown a chart from the Western Study Group (BÇG) and asked five specific questions on its function.
1- Explain what you know regarding the structuring evident from the chart. What was the legal basis for this structure?
2- On what criteria was the selection of personnel who served in the Western Study Group based on?
3- How were these individuals appointed to their positions and how did their positions come to an end?
4- What was the chain of command operating in the Western Study Group?
5- How was the information collected to index public servants used?

The infamous tanks which were driven to Sincan penitentiary on February 4th, 1997 have become a symbolic image of the postmodern coup. The order for the tanks was given by none other than Deputy Chief of General Staff Çevik Bir. While the event took place, President Süleyman Demirel called the Chief of General Staff at the time, İsmail Hakkı Karadayı to ask if he was aware of what was happening. Karadayı then called in Çevik Bir to his office to reprimand him by saying, "I wish you had not done this, the situation is at a very precarious point" To which Bir responded by stating, "My commander, we are losing Turkey, what are you talking about?"

EU COMMISSION: The investigation is an opportunity

EU Commission Enlargement Commissioner Stefan Fule's spokesman Peter Stano made an announcement regarding the February 28th investigation, by stating, "This is an opportunity to reinforce the trust in the superiority of the law and the appropriate operation of Turkey's democratic establishments." Stano also emphasized the importance of maintaining the suspects' rights and requested that suspects only be tried in custody if absolutely necessary and stated that if that is the case, their trial period should be kept to the minimum amount of time.

The Financial Times referred to the February 28th investigation by calling it the "settling of accounts between the country's democratically elected government and the military officers who allegedly plotted against it and its predecessors." Meanwhile, the New York Times wrote, "a former general and 30 other officers were detained Thursday for their roles in a 1997 coup, continuing the clash between the government and the nation's once-indomitable military."