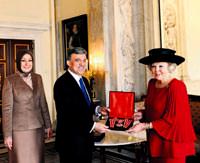 While in Holland as a guest of Netherlands Queen Beatrix, President Abdullah Gül and his wife Hayrünnisa were both awarded Dutch Medals of Honor.

President Gül was greeted in Holland by Queen Beatrix and an official ceremony in his honor.


The ceremony took place in the historical Dam Square, located in the city center of capital Amsterdam. Both nations' national anthems were played in the square after which Gül and Queen Beatrix greeted the ceremonial troops.

After the ceremony, Queen Beatrix held a reception for Gül and his wife Hayrünnisa Gül at the Royal Palace located adjacent to the square. Gül later placed a wreath on the National Monument for the lives lost in World War II.

During their stay in Holland, the Gül couple also conducted the opening for 'The Chamber of Levant Trade: Dutch merchants and Ottoman Sultans' exhibit held at the Amsterdam Museum.