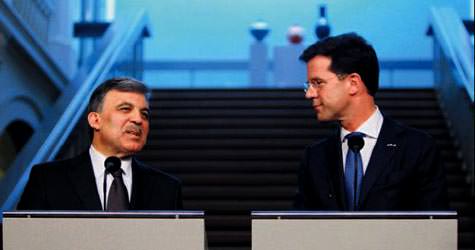 Speaking at a joint press conference with Dutch Prime Minister Rutte, President Gül referred to anti-Islam policy by stating, “If these ideas are misused for political purposes, they could take a dangerous turn.”

When the issue of the surfacing of periodic criticism in connection to human rights violations in Turkey was brought up, Gül reminded that it was a precondition for the start of EU negotiations that Turkey fulfill the Copenhagen Criteria. Underlining the fact that it is because Turkey has fulfilled this political criteria that EU negotiations have begun, Gül went on to state the following:
"Despite this from time to time there are still complaints. Sometimes they are exaggerated. Undoubtedly, it is also our duty to rectify the situation. If there are discrepancies from time to time, then we pursue them and correct the situation. Those who still maintain the perception of Turkey from 10 to 20 years ago, think that you cannot express contradictory thoughts. Well, that is not true, and yes you can. If your contradictory thoughts do not involve violence or weapons, then yes you can express them. This is the kind of country Turkey is, and I want this to be known."

'FRIENDS SPEAK THE TRUTH'
Responding to the same question, Rutte stated "Because our two nations have good relations, we can speak under the pretence that 'friends speak the truth'. When asked how the Dutch Freedom Party's anti-Islam stance has affected relations, Gül expressed that all sorts of notions can exist in nations that believe in multi-party pluralism, and that is not strange. Pointing out that no one in their wildest dreams could have ever believed that the existence of anti-Semitic sentiments prior to World War II could erupt into what ended up transpiring, Gül stated, "If these ideas are misused for political purposes, they could take a dangerous turn. They can spread instantly and cannot be brought under control," Gül said. Explaining that this is a possibility in countries where Islamophobia is rampant, Gül urged everyone to act with caution. Meanwhile, Prime Minister Mark Rutte arrived to the meeting held at The Hague on bike and without a security detail.