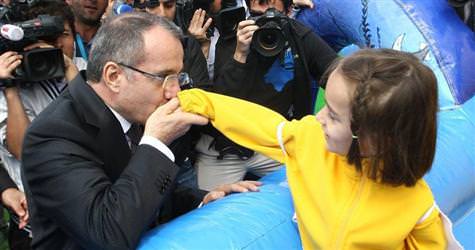 Yesterday marked the last time festivities will be held in stadium’s to celebrate April 23rd, National Sovereignty and Children’s Day. In the capital Anıtkabir was flocked with visitors while at the May 19th Stadium the gendarmerie choir played a popular song by Bonomo, Turkey’s Eurovision contender.

Festivities held in the capital's May 19th Stadium for April 23rd National Sovereignty and Children's day were disappointing due to the surrounding empty stands.

Minister of Education Ömer Dinçer, Ankara Governor Alaaddin Yüksel, Garrison Commander General İhsan Uyar and Ankara Mayor Melih Gökçek drove around the stadium in a procession of cars greeting all of the onlookers and children. During his address at the ceremony Dinçer stated that just as experienced by individuals alike, communities also go through significant transformations which become turning points in history. "April 23rd, 1920 represents a significant turning point in Turkey's history", explained Dinçer.

In addition to playing a series of national marches, the Gendarmerie band was admired for their rendition of Turkey's Eurovision Song Contest contender Can Bonomo's 'Love Me Back' and Sertap Erener's "Rengarenk".

STARS DO NOT RECOGNIZE DISABILITIES

During the parade, in which children marched adorned with a variety of colorful themed clothes, they sported a message for the nation's handicapped, referred to as 'stars' which was written on their shirts, stating, 'Stars do not recognize disabilities'. During the parade and ensuing festivities, students seated in the tribunes held up signs that read, "Sports knows no boundaries" and "Give us possibilities and request the impossible" and "hand in hand for a clean world". After the ceremony, children enjoyed playing in an area set up for them in the field which had a huge blow-up slide, a trampoline and a rock climbing simulation display.

Çalık Holding continued its yearly tradition of festivities for staff and their children on National Children's Day, entitled 'Every April 23rd People Become Children for a Moment'. The celebrations were held at the Holding's conference hall and included a series of events involving painting, singing and dancing with clowns, an illusion show, a traditional Hacivat and Karagöz shadow show and a comedic play. Çalık Holding Human Resources Manager Betül Yılmaz says "These types of organizations which include employees' families are extremely motivating and are a wonderful opportunity for our children to enjoy themselves." Çalık Group employee Aysun Aktoprak explains, "Every year, our children await the festivities organized by our company with great excitement. As parents, we are extremely pleased by the celebrations because not only are they extremely entertaining, but they also help to correctly teach our children about our culture and traditions. " Çalık Holding Foreign Affairs Director Şafak Karaaslan states, "We are extremely pleased that first and foremost by displaying both Hacivat- Karagöz puppet shows and traditional plays, Çalık Holding places importance in reviving our traditional cultural arts and therefore plays a role in perpetuating them."

A VIVACIOUS DISPLAY IN İNÖNÜ

"April 23rd is extremely significant for children to learn and to be brought up well. For Atatürk to name this day in honor of children all over the world gives us both modern and national pride. Happy April 23rd to all of our children", states Bağış.

Governor Mutlu, Bostanoğlu and Selamet later moved on to the celebrations held at the Beşiktaş İnönü Stadium. The stadium ceremony kicked off with the protocol, students and citizens commemorating the day by singing the national anthem and the raising of the flag. Students participated in a parade and demonstrations which was followed by an awards ceremony. On Children's Day, a number of students are selected to spend the day taking over the state's top positions. Hilal Çakırhan, who substituted for Istanbul's Chief of Police Hüseyin Çapkın made sure to request information on children's' crimes. In Eskişehir, Burak Doğru, an eighth grade student who took over as governor, criticized the rescue efforts for Süleyman Çağrı Arı, who fell in the Porsuk Creek.

The BDP Mayor Baydemir refrained from participating in the ceremony held at Diyarbakır's Anıtpark. In Van, students from the Gedikbulak village who lost their school in the earthquake sang songs in Kurdish and Turkish and danced in a circle. A show in Fethiye which included children from 18 different countries received high acclaim, while in Antalya a 5,000 student chorus performed a concert for the event. Meanwhile, the Pendik Municipality gave 200 bikes to the 200 most successful students in Van's Yukarıışıklı, Akçayuva, Karlıyayla and Tekler villages.