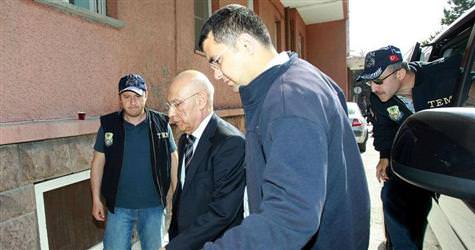 Thirteen military members, seven of which are still serving, were detained yesterday in connection to the investigation into the February 28th Postmodern coup. Police staged a series of searches starting yesterday morning in Istanbul, Ankara, Izmir and Kars.

The third wave of arrests in the probe into the February 28th postmodern coup conducted by Ankara's Special Authority Deputy Chief Public Prosecutor took place yesterday. In raids conducted in Ankara, Istanbul, Izmir and Kars, thirteen military members were arrested, seven of which are currently on active duty.

A number of significant military figures were detained in yesterday's wave of arrests including Brigadier General Lokman Ekinci who was the Commander of the Mobilization Investigation Department which is popularly referred to as the 'cosmic room', known for being the source of the documents to have allegedly come from the Western Study Group. Another serving general who was detained yesterday was Brigadier General İsmail Hakkı Önder, the head of the Land Forces Command's Logistic Services Department. Yesterday's arrests also included former gendarmerie commander retired General Fevzi Türkeri who also served as the Chair of the General Staff Intelligence Department and former Lieutenant General Yıldırım Türker.

TÜRKERİ IS FIRST IN LINE

According to information obtained by SABAH, special authority prosecutors compiled a list of suspects from testimonies and documents obtained in two subsequent raids in connection to the probe. One of the most noteworthy figures detained yesterday was Retired General Fevzi Türkeri who as Brigadier General served as the General Staff Intelligence Counteraction and Security Department Director and later as Full General served as General Staff Chief of Intelligence. Another individual of note detained yesterday was the former Personnel Department Chair Retired Lieutenant General Yıldırım Türker. In addition to providing briefings to members of the press during the February 28th period, Türker was also responsible for preparing reports, tagging individuals and tapping for the Western Study Group.
Türker will be facing questioning regarding allegations he had television series scripted in an attempt to exert psychological influence.

Raids into the homes of active-duty officers were conducted by the Ankara Central Command who were accompanied by police officers. Out of the seven serving military members detained yesterday, three were from Ankara, two were from Izmir and one was from Kars. They were later handed over to the Ankara Central Command. The total number of arrests thus far in the February 28th probe has now reached 55, including the first wave of 31 arrests and the second wave of 11 arrests.

On April 6th, OYAK Chairman of the Executive Board retired Lieutenant General Yıldırım Türker handed over the keys to the first electric automobile to be manufactured in Turkey, the Renault Fluence, which he donated to the Prime Ministry.