A two and a half year delayed trip to Italy 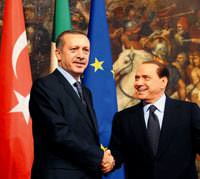 Prime Minister Tayyip Erdoğan will be paying a visit to Italy next week in a trip that was originally scheduled for 2009, however had to be delayed when Italian Prime Minister Silvio Berlusconi was attacked with a statue.

On May 7th, Erdoğan will first head for Slovenia to hold a series of official meetings. While in Slovenia Erdoğan will be presented with the 'World Personality of the Decade' award, by the nation's leading think-tank IFIMES (The International Institute for Middle-East and Balkan Studies). IFIMES officials recently announced that they have selected Prime Minister Erdoğan as the recipient of the award due to the constructive policy he exerts for the Balkans and the Middle East.

Erdoğan is expected to move on to the Italian capital of Rome following his visit to Slovenia. The Prime Minister's Italy schedule begins on May 8th. Erdoğan will first hold a one on one meeting with his friend former Italian Prime Minister Silvio Berlusconi. Later, Prime Minister Erdoğan, who will be accompanied by nine ministers, is scheduled to hold a meeting between the Turkish and Italian government. This meeting was previously scheduled for December 2009, however it was delayed to the following April when Berlusconi was attacked with a statue.

Due to the developments that ensued in Italy's politics, the meeting was once again postponed. In the end, after two and a half years' the long-delayed meeting will be taking place next week. Bipartite relations will be discussed as well as solutions created in order to ensure that relations are affected as minimally as possible in light of the economic crisis in the EU. Foreign Affairs Minister Ahmet Davutoğlu, Minister of Energy and Natural Resources Taner Yıldız, Minister of Transportation Binali Yıldırım, Economy Minister Zafer Çağlayan and Minister of National Defense İsmet Yılmaz are expected to be present at the meeting.