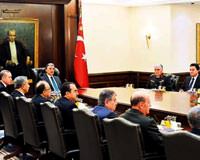 Turkey’s National Security Council (MGK) held its shortest meeting in five years yesterday. The meeting chaired by President Abdullah Gül commenced at 13:50 and went on for two and a half hours. The main items discussed were Syria, Iraq and the fight against terrorism.

Reports on Syria prepared by the Foreign Affairs Ministry, the Chief of Staff and the National Intelligence Organization (MİT) were reviewed at the meeting, which was followed by the release of a written announcement which reiterated Syria's obligation to fulfill the six-item plan established by UN Representative Kofi Annan.

The announcement also emphasized that the bloodshed in Syria must come to an immediate halt and all obstacles lifted for the transition to democracy. "We underline that during this process, protecting the public and ensuring their access is of utmost importance."

Domestic and foreign developments were discussed during the meeting, including additional measures that could be taken to protect the borders. Another significant item on the agenda was the political crisis experienced in Iraq.

The tension experienced with Iraq's Shiite Prime Minister Nouri al-Malik iwas also brought to the table. The announcement drew on the issue by stating that Turkey was closely following the politician developments in Iraq. The announcement also emphasized that the issues faced by Iraq need to be solved within the framework of unity and integrity, pluralist democracy and the superiority of the law.

In regards to the issue of terrorism, the statement released following yesterday's meeting read, "Our security forces relayed detailed information on all anti-terrorism activities, including on recent operations staged and emphasis was expressed on the continuation of efforts in the fight against terrorism."