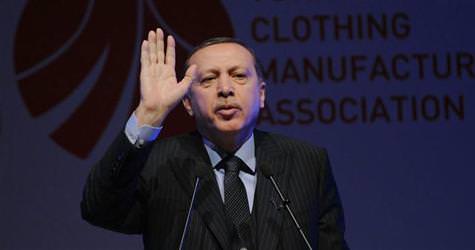 Emphasizing that he found it bizarre that the S&P credit rating establishment chose to downgrade Turkey's note from positive to stable, Erdoğan stated: "On what basis are they lowering Turkey's rating to stable? Because, when a country that has had a positive rating for an extended period their note should actually be upgraded, however instead they say if we raise Turkey's rating this could cause problems for us ideologically so instead they say let's bring it down to stable. Meanwhile, from the other perspective you go and increase the rating for a bankrupt Greece. This is entirely an ideological approach. They have raised Ireland's rating. These guys are going bankrupt. These are bankrupt countries that the IMF and the World Bank have paid out over 100 billion dollars in support. How ridiculous is this?"

Prime Minister Erdoğan explains that S&P's rating downgrade is completely the result of an ideological approach. "This is a progressive country. We now know these accounts and we know the book. This is no longer a Turkey in need but one that comes to others needs. If you go and downgrade our credit rating to stable, no one will buy it. I would describe the price for this as being, 'I no longer recognize your credit rating institution'. The fact remains that by doing this you will not be able to get anyone to believe in it. Everything is very obvious. Our work is obvious, our production is obvious and our exports are obvious. If you look at our growth rates, you will see that we are in second place, following China. This is something that just happened recently."

Prime Minister also added that during this period when global foreign trade is on a downward trend, Turkey has increased exports to a record level.

Mentioning that throughout the country, Turkey has cultural acquisitions that are as old as the history of humanity itself, Erdoğan went on to state, "In addition to our production and marketing, we also have a wide treasure waiting to be discovered and utilized when it comes to branding."
Prime Minister Erdoğan offered a recommendation to those in attendance to further direct their focus towards branding. "We are in a process of acting with the understanding of creating more brands, unique designs and constructions," says Erdoğan.

WE HAVE VERY HIGH POTENTIAL

Emphasizing that this era in ready wear is trying due to global competition, Erdoğan, stated that although there are obstacles, they are not impossible to overcome. For years Turkey has been an example to the world when it comes to textiles and ready wear, says Erdoğan. "It is now possible for us to maintain our global leadership position with a vision, understanding and perspective spanning back 10 to 20 years. We need to elevate to a country that designs, rather than solely being one that manufactures and markets. Turkey has great potential in this regard."

Meanwhile, the General Assembly of the Parliament has passed the Reciprocity Law, which foresees raising the percentage of property that foreigners and foreign companies are able to purchase. The passing of the regulation has resulted in the anticipation that there will be a significant increase in real estate investments made in Turkey by investors from the Middle East, Central Asia and Russia.