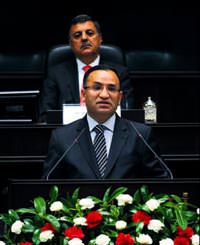 Calling for Turkey to move to a presidential form of government, Deputy Prime Minister Bozdağ says, “There must be discussion of the presidential system in which the legislative and executive are independent of one another in a real sense.”

Bekir Bozdağ stated that the current system does not fully reflect a parliamentary system and criticized its inability to effectively implement a checks and balances system. '' The system which enables the most effect supervision is the presidential system", says Bozdağ who went on to emphasize the "true need to discuss a presidential system which would truly render the execution and legislation independent. Stating that new regulations need to be added to the new constitution, Bozdağ went on to say that if Turkey does not switch to a presidential system, then a system will need to be brought on in which the legislative and executive are independent.

"The process has started and this can all be discussed. These are all the basic principles of democracy. Whether this will be a presidential system or a semi-presidential system, this will be debated.
If in the end, the parliament says 'we can apply this system' then there will be nothing else for us to say."