Gül’s message for Europe Day: We can save Europe 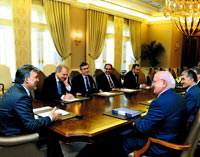 In messages delivered for ‘Europe Day’, Gül said, “Turkey could save Europe”. Meanwhile Erdoğan emphasizes his intent to join the EU.

A MESSAGE TO EUROPE

In his message to commemorate Europe Day, President Abdullah Gül stated: "Europe Day provides a significant occasion in which to be reminded of the commitment to the values Europe is based on such as basic rights and freedoms, democracy, superiority of the law, gender equality and the free market economy. Turkey made great sacrifices in the past in the name of the free world and its values and especially for Europe.

Today however it exuberantly accepts Europe's political project of democracy which is to widen in the east and south Mediterranean and has provided concrete contributions to the region's history.
Meanwhile for over 16 years with the Customs Union, Turkey has played a role in Europe's economic integration and with its fast growth rate and production and investment possibilities for world economy, and is in a position to contribute to a Europe which is currently in a standstill, by revitalizing the economy.
Extreme movements nourished by xenophobia, racism and Islamophobia, which use the economic crisis as an excuse, is first and foremost a threat against European values.
My most sincere desire is to prevent this threat from allowing the EU to look further inwards and to gain ground to harm the universal values they pioneered in."

"The importance of Turkey's EU membership is not something that needs to be explained. We will continue our determined efforts in the upcoming period on this historical project which will have positive reflections on our continent and beyond. We expect our EU partners to fulfill the responsibilities that befall them during this period in a productive manner. The rooted history between Turkey and the EU and our mutual benefits makes Turkey's joining the EU indispensible."