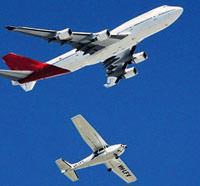 Aiming to be the sole ‘aerospace university’, Turkey’s Aviation Board University is also planning to manufacture the first ever domestic airplane by 2014. In collaboration with 82 different firms, the university also plans to train Turkey’s first astronauts.

The Turkish Aviation Board University (THKÜ), which was inaugurated on May 2nd by President Abdullah Gül, will be producing Turkey's first-ever domestic plane by the year 2014. Positioned in the education sector as Turkey's first space and Aviation University, THKÜ aims to become specialized in this branch and to begin training astronauts. THKÜ Rector Prof. Dr. Ünsal Ban states, "Academics, engineers and individuals that will be able to collaborate with the world's best universities and operations will be taught in our university. Information will be transferred and we will become a knowledge production center." Ban went on to state that they plan to produce Turkey's first ever domestic plane and hope to do so even before the first domestically produced vehicle is released.

Prof. Dr. Ban explains that in 2014, they plan to produce two and four-person planes. "We will design and produce the plane. There is no other university that has an airport and 80 planes." Ban also explains that for the production of Turkey's first domestic plan they have been speaking with 82 firms from the Middle East Industry and Trade Center (OSTİM) and will be collaborating with firms in order to produce spare parts. According to Ban, Turkey is a country that has the capability to produce planes, and the Turkish Aviation Board University will be able to eradicate the lack in coordination. Ban also states that there will definitely be a THKÜ representative in every country.

550 STUDENTS TO BE ACCEPTED

With 236 students at present, including those at the İzmir High Education Vocation School, in the upcoming year THKÜ aims to increase their department number to 13 and their student population to 550. "The Turkish Aviation Board is an 87-year-old year-old establishment of this nation. Therefore, our aim over the next four years is to make our university entirely free. This year our Business Management Department was filled with 60 students on grants. We plan to increase this number."

Pointing out that the aviation sector has multiplied by seven times over the past five years; Prof. Dr. Ban states that they have given all of their students employment guarantees. "At present, there are almost 800 foreign pilots in Turkey. Our youth needs to be the ones given these value-added positions." Explaining that this will be the first time pilots will be trained in an academic setting in Turkey; Ban says that graduates will also have the option of continuing on in their academic career.

THKÜ, which opened recently with a ceremony attended by President Abdullah Gül, plans to open six addition departments next year. Prof. Dr. Ban shares their plans by stating, "We will be opening up computer, electric-electronic, mechatronics, industry, machinery, space and space engineering departments. In addition to offering student and teacher exchange programs with the prestigious Vaughn College, we have also made an agreement on collaborative research and providing graduates with employment opportunities."