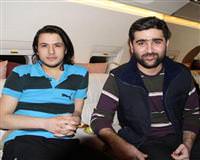 After intensive diplomatic efforts by Prime Minister Erdoğan, the two Turkish journalists who were held captive in Syria for approximately two months were first sent to Iran. The journalists were then brought back to Turkey on a plane personally sent by the Prime Minister. The two journalists expressed how proud they were with their country when they saw how their nation stood up for their own citizens.

Upon their return to Turkey from Tehran on a plane sent by the Prime Minister, Adem Özköse and Hamit Coşkun shared details of their experience being held captive in a Syrian cell for 58 days after arriving to Syria to film a documentary. In total, it had been 70 days since the two journalists had set foot on their homeland.

Revealing details of their harrowing experience, Adem Özköse says, 'When we were first captured we were taken to the basement of a home. They blindfolded and handcuffed us. They held guns to our heads. They were talking amongst themselves about what they were going to do to us. They seemed confused. They wanted to make an exchange with oppositionist forces that were holding Assad supporters. They mentioned killing us." Özköse went on to explain that it was then he began praying and performing the prayer ritual as if it was his last. He even told Hamit to do the same and explains that they truly felt as if it may have been their last.

'Let Polat Alemdar come and save you'

''They took us into a cell that was two meter's long and one meter wide and made us sit handcuffed on the cement floor and began questioning us. We didn't see each other again for another 52 days," says Özköse. He also said that while in the cell, the wardens mocked them by bringing up the popular Turkish television drama series 'Valley of the Wolves' and stating, "Let's see Polat Alemdar come and save you. You have one Polat Alemdar, we have a thousand." Reminding that they started off in Syria with intentions to film a documentary Adem Özköse says, "It turns out we actually filmed a documentary of our own lives, without even realizing it." He went on to explain his plans to write what he experienced in the cell. The book will be called 'Hucre' (Cell) says Özköse. Cameraman Hamit Coşkun relayed how he began to feel the fear of death from the very first moment that they found themselves in the middle of an armed group. "When I saw them stick our driver in the trunk of another vehicle, my feelings of fear hit the roof," explains Coşkun.