‘Zero problems does not mean submission’ 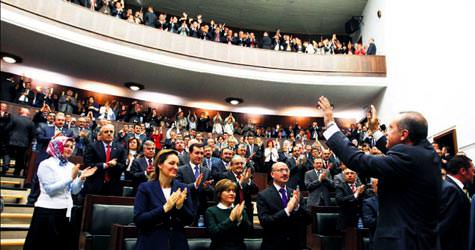 During a speech at the AK Party Grand National Assembly meeting, Prime Minister Tayyip Erdoğan spoke out against critics of the nation's foreign policy 'zero problems' strategy. Stating, "zero problems does not mean submission" Erdoğan was actually targeting CHP Chair Kemal Kılıçdaroğlu. "Having such a chairman for the CHP is unfortunate, however it is fortunate for us," stated Erdoğan.

During his address, Erdoğan went on to deliver the following messages:

The zero problems policy does not equate to submission

"The zero problems' policy is not turning a blind eye. Nor does it mean to remain silent against injustice, the oppressed or those wronged. We will never overlook persecution. Nor will we ignore tyrants that are unjust and use weapons against their own people. Just how zero problems means to be tolerant, to be patient, to communicate and collaborate, it also means to stand upright, to stand courageous and to act resolute.

I want to remind all regional nations as well as the entire world of one very important point: it is extremely wrong to consider the crisis in Syria as being sectarian-based. It is a humane issue and one of conscience. Those who perceive issues as being sectarian, ethnic or ideologically based and those who embrace a stance accordingly are making a grave mistake. This sort of perspective is like adding fuel to a flame and God forbid any sort of spark would quickly turn into a huge fire.

When it comes to Syria, the CHP Chairman does not express what he is truly thinking. Instead he prefers to step around the crisis. I speak openly when I say, disclose the secret regarding Syria. Come out courageously and explain why you are sympathetic to the Syrian administration. Without inferring, inflecting or circling the issue, courageously speak the truth. CHP has no foreign policy; however the party's chairman has other sorts of subconscious sensitivities.

This individual thinks he is serving politics in Turkey, He comes out and says, 'I am not going to allow any country be left where Recep Tayyip Erdoğan will be able to comfortably. He won't be able to go to Europe and he won't even be able to go to Arab nations'.

Then he goes on to state, 'Wasn't he going to receive a human rights award from Europe? But he didn't, he didn't even go in the end.' Well, what does he mean by that. We were going to take a trip to Germany on March 17th. However, we lost 12 soldiers in a helicopter crash in Afghanistan. Therefore, we cancelled our trip. However, he means something else here. If you remember during the award ceremony we were supposed to attend, there were certain protests staged in Germany. Who was it that organized these protests? PKK supporters in Europe, Armenian organizations and a number of foundations and federations that use the Alevi title. The CHP Chairman infers that we did not go to the event because of these demonstrations and acts as if it is a victory by CHP. This is an extremely dangerous way to act and instead only encourages PKK supporters and certain Armenian organizations that are hostile to Turkey.

The CHP Chairman doesn't even consider the possibility that we cancelled our program due to the lives lost. We have never and would never refrain from going to a country due to the fact that PKK and Armenian organizations are staging demonstrations."