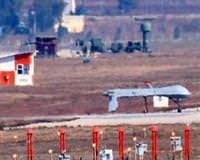 The United States’ Wall Street Journal reported yesterday that the attack staged on 34 villagers mistaken for terrorists in Uludere was based on intelligence collected by the Predator, a U.S. drone. The article goes on to state that the order to bomb was made by the Turkish military.

The Wall Street Journal article writes that on December 28th, a U.S. unmanned aerial vehicle, known as the Predator, captured imagery of a caravan of people, information which they relayed to their Turkish counterparts.

According to an internal assessment by the U.S. Department of Defense, the U.S. drone reported seeing movement of humans and animals towards the border, however left the final decision up to Turkey as to whether or not to stage a military operation. Speaking to the Wall Street Journal, one Pentagon official stated, "It wasn't an American decision. The Turks made the call."

According to the newspaper article, the 'Combined Intelligence Fusion Cell' which was using the drone, immediately informed Turkish officials upon detecting the group heading for the border. U.S. officials said additional surveillance from the Predator might have helped the Turks better identify the convoy; however Turkish officials were stated to have redirected the drone to fly it elsewhere.
The Wall Street Journal went on to write that the Turkish military refrained from responding to questions and that the Prime Ministry, the Interior Ministry and Defense Ministry have also said they would not comment.

According to the Pentagon's report, during a routine flight on December 28th, the U.S. Predator drone noticed a convoy headed from Iraq towards the Turkish border. The U.S. officials were unable to determine for certain whether they were terrorists or civilians however their location, being one used frequently by the PKK raised suspicions resulting in the Americans alerting their Turkish counterparts. Later, the bombing took place, resulting in the deaths of 34 civilians.

According to the report, the U.S. aircraft moved on after relaying the intelligence, leaving the final decision as to how to act up to the Turkish military. WSJ quotes a Pentagon official as stating, "It wasn't an American decision." The report, which questions whether or not the U.S. had a role in the incident which led to a significant number of civilian deaths, states that instantaneous intelligence–sharing between the U.S. and Turkey has actually decreased the number of civilians deaths overall, however writes that this was a "tragic exception".

'U.S. PLAYS NO ROLE IN STRIKES'

The article explains that the U.S. helps provide intelligence for operations in Turkey but plays no direct role in any strikes and states that U.S. drone flights in support of Turkey span back to November, 2007 when the Bush administration set up the Combined Intelligence Fusion Cell in Ankara. The WSJ wrote that relations have grown closer under the Obama administration and notes that Turkey has begun to purchase U.S. drones

'WE WILL BE OPENING A CASE AGAINST THE U.S.'
BDP Group Deputy Chairman Hasip Kaplan states that they plan to take the United States to court in connection to the deaths of 34 people in Uludere and emphasizes that international law does allow for this. According to Kaplan, the government made a mistake, he also went on to state that they had been asking where the intelligence was received from the start. "It appears that the incident has blown up in the U.S. media. The intelligence was not domestic, it was imported. Uludere residents will be taking the U.S. to court and international law, does allow for this opportunity."