No end in sight to CHP’s internal strife 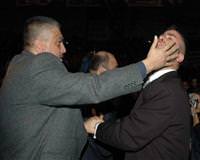 Known in Turkey’s political world for its internal conflict, there appears to be no end in sight to the strife within CHP. While suffering a continuous loss of votes due to the party’s internal issues, CHP Chairman Kemal Kılıçdaroğlu stated recently that those who start fights will be fired from CHP.

Speaking at the Istanbul District Congress and yesterday at the CHP Headquarters in Ankara, CHP Chairman Kemal Kılıçdaroğlu warned party members by stating, "Those who fight can go be in another party."

Noting that the basic purpose of politics is to serve the public, Kılıçdaroğlu stated that he would not be allowing any sort of bickering. "An individual who starts fights is not a CHP member. In the past, we would just let it blow over. However, we are not going to do that anymore. Whoever wants to fight or be combative has no place in this party. They can go to another party, but they can never work in CHP. I would like every party member to accept this fact."