Erdoğan offers advice to a Europe in crisis 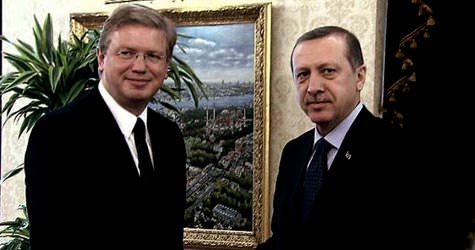 Speaking to the European Commissioner for Enlargement Fule, Prime Minister Erdoğan stated, “You can turn this crisis into an opportunity. However, do not turn inwards. Instead, protect your vision of enlargement.”

During the meeting, which took place for approximately and hour yesterday at the Prime Ministry, Erdoğan told Fule, "There is a deep crisis in Europe. You can turn this crisis into an opportunity. However," warned Erdoğan, "do not turn inwards."

Prime Minister Erdoğan welcomed Fule warmly and in return the European Commissioner thanked him for his hospitality. The topic of the economic crisis suffered throughout Europe permeated the discussion. Erdoğan relayed how they were able to remain unaffected by the surrounding negativity and referred to Turkey as an island of stability.

Erdoğan offered his hopes that the crisis will be surpassed quickly by EU nations and told Fule, "Sometimes crises are opportunities. I hope that you turn this one into an opportunity. However, in order for the EU to be able to do this it must not turn inwards. Instead, protect your vision of enlargement."
Topics such as the recent presidential election in France and the situation in Syria were also discussed during the meeting.

Turkey's EU accession process was also laid to the table, with Fule underlining the importance of Turkey's EU accession. Fule also relayed details on the 'Positive Agenda' established with EU Minister Egemen Bağış and intended to put Turkey's EU process back on track. Fule thanked Erdoğan for the reforms Turkey has made thus far within the EU framework and touched upon how important it is that support be continuous when it comes to reforms.

During Fule's stay, the EU Commissioner and Turkey's EU Minister and Chief Negotiator Egemen Bağış launched the 'Positive Agenda', intended to put Turkey's EU accession process back on track.Expressing that EU negotiations have been stifled due to a number of political obstacles, Bağış states, "We are taking a step in the hopes of starting off a new period in which Turkey-EU accession talks gain new momentum." Bağış went on to explain that according to the Positive Agenda framework they will be establishing working groups for eight different chapters, which will hopefully increase the speed of the EU accession process. Füle expressed the intentions of establishing the Positive Agenda as being aimed at revitalizing the accession process and putting Turkey's EU negotiations process back on track."