February 28th coup perpetrators will pay for what they did 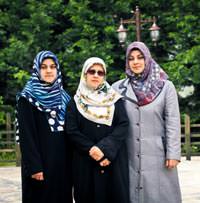 Hüda Kaya and her three daughters, who were given the death sentence during the February 28th post modern coup era, filed a criminal complaint at the Ankara courts yesterday.

The family has decided to become co-plaintiffs in the case to be opened following the ongoing investigation in to the coup.

Arrested in Malatya in 1999, Hüda Kaya and her daughters İntisar and Nurcihan have served time in a number of penitentiaries. Her third daughter Nurulhak was killed in a traffic accident after she was released from prison.

The top headlines of newspapers released on June 23rd, 1999 all read the same, 'The 51 Death Sentence Headscarf Case'. The articles were of course covering the verdict of a trial at the time which included a mother and three daughters in a long list of suspects. Hüda Kaya, along with her daughters, 18 year-old Nurulhak, 17-year-old İntisar and 15 year-old Nurcihan Saatçioğlu were all sentenced to death for wearing a headscarf. Hüda Kaya, herself, spent 20 months in jail, her daughter Nurulhak served ten months and İntisar spent one year in prison. Because she was still a minor at the time the events transpired, Nurcihan's sentence was cut in half.