We need to trust our national resources 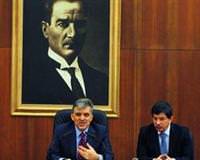 President Gül responded to the recent allegations that intelligence provided by the U.S. led to the Uludere incident in which 34 civilians were killed by stating, “We first need to trust our own national resources.”

President Abdullah Gül was responding to questions from the press at Esenboğa Airport, prior to his departure for the NATO Security Summit, when he remarked upon recent allegations surfaced in the Wall Street Journal that the bombing in Uludere was based on imagery obtained by the U.S.
Reminding that the Turkish Armed Forces have since refuted the Wall Street Journal's claims, Gül stated, "We first need to trust our own national resources. If our government or any of this nation's establishments, including the General Staff have released a written announcement that states otherwise, then that is what we first and foremost need to trust in. If it is just hearsay, or gossip, well that is another issue, however when a clear written statement is presented on the matter, then we first need to believe in that content. This is an issue that deals with our collaboration with the United States in the fight against terrorism. We have been benefitting from their capabilities for a long time now.
Therefore, according to our own announcement, the initial imagery was obtained from our own resources. When there is imagery of something present then others can also capture it. In the end all of this intelligence would of course be sent to Turkey. Therefore, I don't think its right to embark upon a useless polemic. There was an incident that transpired. It wasn't a one-second incident. There was a convoy of people. Anyone observing this situation could take a photograph. Therefore, it is extremely possible that we first obtained imagery from our own resources and then later received information from other sources. This is quite normal."

When asked a question regarding a recent meeting held with Nechirvan Barzani, the Prime Minister of the Northern Kurdish Region of Iraq, the President stated, "We always speak with all groups and important actors in Iraq. When it comes to Northern Iraq, as you know, it is extremely important that we collaborate in the fight against the PKK. These are the issues we discussed during the meeting." Drawing attention to the presence of significant problems within the country, Gül stated, "We want an Iraq that is at peace with its own public and neighbors."

TO TWEET FROM TWITTER
Headed to the states to attend the NATO Summit, Gül will be moving on to Los Angeles from Chicago where he will meet with administrators from a number of investment firms. Gül will also be paying a visit to the Apple, Google, Facebook and Twitter headquarters. Here, Gül is expected to send out a tweet, from the company itself. Gül has 1,818,195 followers on Twitter and over 130,000 on Facebook.