Gül speaks to our NBA representatives 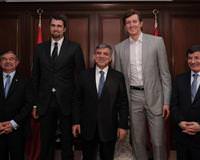 President Abdullah Gül expressed that even if from time to time Turkish-American relations may have waned; they have always maintained their strategic importance and have always remained strong.

During his visit to the United States to attend the NATO Summit in Chicago, President Gül also attended a reception held by Washington Ambassador Namık Tan in honor of May 19th Remembrance of Atatürk and Youth and Sports Holiday.

During an address at the reception, Gül expressed how pleased he was to be the first Turkish president in a long time to visit Chicago, and went on to state the following: ''Today, May 19th is a holiday for us. We are celebrating this holiday today in America with you. This is a whole other source of joy. As you know, May 19th is representative of a difficult time in our history, a struggle for existence. At that time, the Great Atatürk departed Samsun to initiate the struggle for independence. From Samsun, he travelled through Anatolian land and staged a great fight in what would be the end of the Great Ottoman Empire and the founding of the Turkish Republic. It has been almost 100 years, and now we are all very proud to serve our public and do all that we can for our nation as citizens of the Republic of Turkey.

President Gül also emphasized the importance of Turkish-American relations and stated that not only are they extremely important on a one on basis, but their relations also hold much significance for NATO. "We are celebrating the 60th anniversary of our NATO membership. We became members of NATO in 1952, 60 years ago. At that time NATO had just five to six members, one of which was us."

''Everyone thinks Turkish-American relations span back to the Korean War. We lost soldiers to help our Korean friends fight for liberty and freedom. Of course we were great heroes and Korea has not forgotten this. This is well known in Korea and Turks are considered to be blood brothers. However, Turkish-American relations actually span way back. So, way back that in fact all of you that live in America will know this well. You all know the Washington Monument, which is 169 meters high. Well, when you reach the 58th meter, you will see the decoration of the 31st Ottoman Sultan Abdulmecid, which spans back to 150 years ago. There is also a marble plaque containing a relief belonging to Suleiman the Magnificent on the 23rd door of the balcony of the U.S. House of Representatives. This shows that Turkish-American relations span way back. Once Turkey joined NATO in the 1950's however, U.S. and Turkish relations became extremely important, now it is one of the strongholds of Turkey's foreign policy.

''Our alliance and friendship has always protected its strategic importance"

''When I served as Minister of Foreign Affairs and now as President and came together with prime ministers, foreign affairs ministers, senators and MP's, I would always tell them how great America is. They are involved with a number of regions in the world and take interest in a number of events. I would say to them, if you were to list their interests on a piece of paper, you would see that Turkey is one of the nations the U.S. is most involved in. If I wrote a list of what we were most interested in, you would see that there are significant similarities.

''Strength is born from unity''

Towards the end of his speech, President Gül, addressed the Turkish-Americans in the hall by stating, "You all live in America. While you do so, however to a certain degree you represent Turkey." Gül then offered the words of wisdom, "Strength is born from unity.

President Gül went on to mention that Turkey's national basketball players Mehmet Okur and Ömer Aşık, who play for the NBA, were also in attendance and stated, "You all represent Turkey here. There are so many valuable Turkish citizens in universities, the business world and in a variety of different places. I am sure you have seen how much Turkey has changed in recent years. Turkey is constantly on the agenda and mostly for positive reasons. Whereas in the past from time to time, negative news would surface, now just the contrary, Turkey's successes, gains and contributions are what surfaces to the agenda. You must be well aware of this. Your activities, your influence and your presence is a great advantage to our strong country. I want to wish you all success in the hopes that this will only continue."