A lesson on Democracy in Pakistan 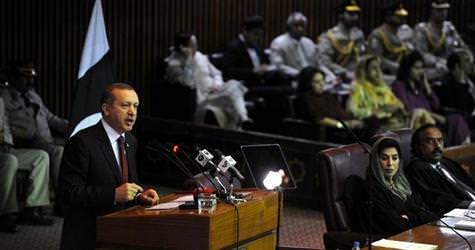 Prime Minister Tayyip Erdoğan delivered a lesson on democracy during an address for the Senate Joint Session at Pakistan’s National Assembly.

The session began with a reading from the Koran. During Erdoğan's speech, which was periodically interrupted by spurts of applause, the prime minister stated; "There is nothing an assembly which has the public behind them cannot do. Democracy was not achieved easily anywhere in the world. The road to any destination is always filled with obstacles. The way to surpass these obstacles is to fearlessly continue the struggle and to use the strength gained from the nation in order to be able to serve that nation. Democracy is finding solutions to economic problems and broadening freedoms for the public. Democracy is not a regime of perfection; it is a progressive method of administration. It is important to have a healthy democracy and an administration that gains strength from democracy itself. It is of vital importance for the distribution of peace and welfare in our region that Pakistan is governed by democracy and national congruence."

Erdoğan went on to state, "The public's fundamental expectations from democratic ideals has always been to find solutions to economic problems and a broadening of freedoms," and expressed that Turkey will always stand behind the Pakistani public in the struggle against terrorism. Erdoğan also touched upon Arab Spring in his speech and stated, "If there is a strong Muslim world, then the problems here can be solved through peace."

With Erdoğan's presence, yesterday's session in the Parliamentary Assembly was the most highly attended session of late. Erdoğan, which is the sole Turkish Prime Minister to speak in the Pakistani Assembly, also delivered an address during a visit to Pakistan in 2009.

An Erdoğan break for the Assembly boycott

The opposition, which has long been staging a boycott from the Assembly due to allegations of impropriety by Prime Minister Gilani, decided to take a break yesterday in order to attend Erdoğan's speech at the assembly. Main opposition leader Ali Nissar Khan told Erdoğan directly, "I came here for you. Your moral personality has brought us together."