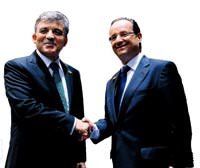 The ice formed during the Sarkozy era has melted as France’s new leader Hollande told Turkey’s President Gül,”Let’s not lose any more time. I am not considering using Turkey as a means to conduct internal politics.”

President Abdullah Gül met with France's newly elected president Francois Hollande at McCormick on the sidelines of the NATO Summit. The meeting, which lasted approximately half an hour, began with President Gül's suggestion that they "Turn a new page," in Turkish-French relations. Hollande responded by telling his Turkish counterpart that he would not use Turkey as a means for internal politics and stated, "Let's not lose any more time."

Gül brought up the fact that the two nations share historical ties which span back 400 years and did not try to hide his discomfort at the current state of Turkey-France relations. In the end it was Hollande's remark, "Let's not lose any more time. It is my intentions to reestablish relations as they were before," which resulted in melting the ice. France's new leader, expressed the importance they place on Turkey by calling the calling the nation a reference point for Arab Spring, and stated, "You are also important actors when it comes to Syria."

Qualifying the economic crisis in Europe as a 'joint issue', Hollande went on to request from Gül that both nations' ministers set aside time to meet periodically in an effort to repair bilateral ties. It was decided that to start off, the two nations' foreign affairs ministers would soon be scheduling a meeting.
Gül went on to point out that the two nations do not have a conflict of interests, in fact they share mutual interests and stated, "I would like this to be the beginning of a period of close relations. We are Europe's two great countries."

In response to Gül's resolute remark regarding EU membership, Hollande stated, "I will not be making Turkey a matter of internal politics. Of course this does not mean that it won't be debated by the French public. However, we need to prevent misunderstanding and mutual accusations," expressed Holland.