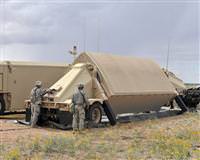 It was officially announced yesterday during the NATO Summit in Chicago that the Ballistic Missile Defense System is now at interim capacity.

With an expedited order by U.S. President Barack Obama to Secretary of Defense Leon Panetta, operational control of the AN/TPY-2 radar positioned in Kürecik, Malatya has been passed on to NATO.
Obama's decision was announced by Ivo Daalder the U.S. Permanent Representative of NATO, during a briefing at the White House yesterday.

Following the trials held in February and with an agreement signed between the United States, Spain, Turkey, Romania and Poland, the decision was reached to transfer one billion dollars to the missile defense system. Up until yesterday, the United States had full operational and maintenance control over the missile radar defense system that was set up in Malatya in December, 2011.

While plans were for NATO to 'modestly take over control', Turkey's request for the transition to happen immediately, resulted in Obama's orders for operational control of the AN/ TPY-2 radar to be handed over to NATO during the summit. This decision marks the first stage for the ballistic missile defense system which is expected to reach operational capacity in 2015 and full capacity by 2018. By the year 2020 the system will have become an intercontinental ballistic missile system.