A Turkish President on the West Coast 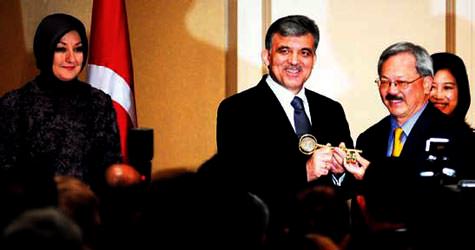 In the U.S. to attend the NATO Summit in Chicago, President Gül has now moved on to San Francisco, becoming the first president to visit the West Coast. Yesterday, President Gül was given a key to the city.

President Abdullah Gül has officially become the first Turkish President to ever pay an official visit to the 'West Coast'. Gül, who was recently in Chicago to attend the NATO Summit, has made San Francisco his second stop. While in the capital of technology, Gül met with Turks residing in the west coast and was also handed a key to the city by San Francisco Mayor Edwin Mah Lee. Speaking to Turkish expatriates at a reception held by Mayor Lee in honor of Gül, the President pointed out that a number of technological innovations which have changed our daily lifestyle were created in this region. "The technology of the future will continue to come from this region for awhile now. Therefore, it is important we hold onto this key. Since I have it, I may come any time and open your door." President Gül also mentioned that Turkish politicians generally tend to visit Washington and New York and stated, "Once we finish our work here, we end up just returning to Turkey. However, if we were to do that we would be neglecting how great America is and how lively its economy is in other regions. We needed to put an end to this negligence."

President Gül was accompanied by First Lady Hayrünnisa Gül and Washington Ambassador Namık Tan, who also served as press spokesman alongside Abdullah Gül when he was Minister of Foreign Affairs. President Gül addressed Turkish expatriates, stating that some still perceive Turkey according to its former image. "Some people still have apprehensions concerning Turkey. However, everything is very different today. Over the past ten years, Turkey has become a country that has been renewed in terms of politics, the economy and the judicial system. And reforms will continue. Do not hesitate to come back."
Gül also mentioned the great contributions Turks have made to the city and expressed that he wants those who have honed their skills in the center of technology and innovation to relay their knowledge to Turkey.

Gül later went on to Stanford University to speak at a conference on leadership. At Stanford, Gül was greeted by former U.S. Secretary of State Condoleeza Rice. During his talk, Gül told a story from his childhood in Kayseri. Explaining how children who finish elementary school are traditionally tested out in their family's line of work, Gül stated, "I worked for my grandfather's store. The job I was given was to sell soda in a bucket full of ice. My uncle would yell out, 'Ice cold soda' and would sell a whole bunch. They wanted me to do the same, but I just couldn't I was too shy. If I had been successful that day, I may not have become the President of the Republic of Turkey."

A VISIT TO SILICON VALLEY

During Gül's five-day stay in San Francisco, he will also be paying a visit to Silicon Valley known for being the heart of technology. After visiting Apple and Google, Gül will also be going to the Facebook and Twitter headquarters, both social network sites the President is known for being actively involved in.