'We are not just friends, we are strategic partners' 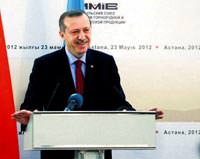 Prime Minister Erdoğan had a warm greeting in Kazakhstan where he flew on following his recent trip to Pakistan. Two significant agreements were signed during his stay.

Prime Minister Tayyip Erdoğan says Kazakhstan is no longer just a friend and brother state, but now the two nations are strategic partners.

Kazakhstan President Nursultan Nazarbayev greeted Erdoğan at the Akorda Palace with an official ceremony. The two held one on one meetings as well as met with mutual committees and Nazarbayev and Erdoğan signed a joint declaration to form a High Level Strategic Council. During the official ceremony, the New Synergy Joint Economic Program was also signed.

Erdoğan stated that the first meeting will take place when Nazarbayev, which he refers to as the 'wise man of the Turkish world', visits Turkey.

Erdoğan went on to deliver the following messages:

FIRST MEETING IN OCTOBER: We are very pleased to be hosting President Nazarbayev on October 11th and 12th. We raised our relations to a strategic level during Nazarbayev's visit to Turkey in 2009. Today we expressed our joint intentions to raise relations to new levels.

WE ARE NOT JUST FRIENDS: We are no longer just friends and brothers. We are now also strategic partners in the true meaning of the world. We will exert joint efforts in order to develop collaboration. It will please us to exert just as much support for Kazakhstan's efforts to become as strong as possible. Kazakhstan has achieved great success in the past 20 years since its independence. When I arrived seven years ago, it was a very different Astana and Almata. Today they are practically unrecognizable, which is a testament to Nazarbayev's true leadership, broad government experience and vision.

A RAILWAY FOR KAZAKHSTAN: One of the most signficatn steps to be taken is a transportation project to establish a rail system between Baku-Tiflis and Kars. After sharing a meal with Erdoğan, Nazarbayev walked him down the stairs to his car door to say goodbye. Nazarbayev and Erdoğan hugged as they said farewell.

A LANGUAGE GESTURE
During the Kazakhstan-Turkey Business Forum, Erdoğan and Masimov exchanged a number of gestures and jokes which contributed to the lively and warm environment. While Masimov's address in Turkish was watched with wide interest, Erdoğan's attempt to speak Kazakh ended with a standing ovation. Erdoğan couldn't stop laughing as he attempted to speak the language and in the end he stated, "I am having a hard time, this is enough for today."

ERDOĞAN: THREE CHILDREN IS TOO LITTLE HAVE AT LEAST FIVE
Prime Minister Erdoğan, who has been recommending people have three children during his domestic and international programs, made a suggestion to Kazakh Prime Minister Masimov for every family to have five children. Erdoğan supposedly said to Masimov, "The financial means are in place. This population is not in proportion to the land or this area measurement."
During his concise speech at the meeting, Masimov said to Erdoğan, "Welcome to our homeland."

DINNER INCLUDED A SONG FROM TARKAN
Nazarbayev hosted a dinner in honor of Erdoğan and his committee. The dinner was supposedly very lively and Erdoğan even clapped along to the music played, which also included a song from Tarkan.